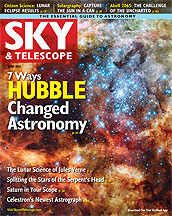 The universe is a vast place largely beyond human comprehension. Yet even if we can't really understand the concept of 1 billion light-years, we can still experience the universe with our limited capabilities — whether that be through the spellbinding images from the Hubble Space Telescope, featured in our cover story celebrating Hubble's 25th anniversary, or through the low-tech but just as captivating solargraphs that capture the motions of the Sun. We experience the universe in an even more visceral way when we observe through our eyes and telescopes, for example, by charting a galaxy cluster more than 1 billion light-years a way. Or, as Sky & Telescope readers have done for decades, by precisely measuring crater timings during a lunar eclipse. As we enter into summer, Saturn, the Moon, and the stars of the Serpens Caput beckon, and the universe awaits.

How Hubble Changed the Face of Astronomy
The first of the "Great Observatory" space telescopes transformed what astronomers knew — and didn't know — about the universe.
By Govert Schilling

Catch the Sun in a Can
Here's a fun astrophotography project that anyone can do.
By Maciej Zapiór

Super-Saturn Rings by John Bochanski
Watch a video showing the complicated light pattern that revealed rings around an extrasolar planet.

See Saturn and Its Moons
Saturn is closest in May and June, so take the opportunity for a closer look with our mobile app.

Lunar Librations by Sean Walker
Librations and other lunar data for June 2015.

They Meet At Last
Jupiter and Venus come together in an epic conjunction.
By Fred Schaaf

Saturn At Its Best
Saturn is closest in May and June, with its rings tipped wide open.
By Alan MacRobert

A Heaven Full of Stars
Split the Serpent's star systems into their colorful components.
By Sue French