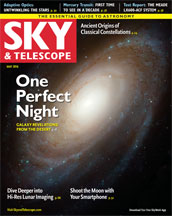 You know those Greek stories you've heard about the constellations, like the one about Perseus, Andromeda, and the sea monster Cetus? Turns out the Greeks had a far more ancient source of inspiration for their poetry: the Mesopotamians. Read the fascinating story-behind-the-story of some of the most popular constellations. Then turn your eyes to the future and learn how telescopes have tunneled through the atmosphere to see the stars as Hubble would — and even better. Adaptive optics has already revolutionized astronomy but it's not done yet, so find out what the future has in store. Finally, turn to the present to relive one man's perfect night of clear seeing. Can you make out the details he saw amidst the spiral arms of M81 and M82? Plus, find out what optical illusions the Mercury transit holds in store for us on May 9th and learn how to shoot the Moon, whether it's with your smartphone or a full rig.

Two Cool Galaxies
A clear night gives the author a newfound awe for the incomparable M81 and M82.
By Howard Banich

Our Surprisingly Ancient "Greek" Constellations
Perseus the Wizard, Ursa Major the Dragon-Wagon — many of the classical Greek constellations were revamped from ages much earlier.
By Craig Crossen

Untwinkling the Stars
How did the world's largest telescopes conquer the tempestuous atmosphere?
By Shannon Hall

Anomalous Appearances
How will your observations of the Mercury transit stack up against the historical record?
By Thomas Dobbins

Targeting Luna
High-resolution close-ups of the Moon can be a satisfying challenge for modest apertures.
By Robert Reeves

Two Cool Galaxies
Test yourself - how many details can you see when you look at galaxies M81 and M82?

Adaptive Optics: Before and After
See how adaptive optics has revolutionized astronomy in this image gallery.

Expert Tips for Basic Lunar Imaging
It's easy to take high-quality images of the lunar disk: find out how.

Lunar Librations
Librations and other lunar data for May 2016.

Mars Comes Close
Mars gives us our closest look in a decade, while Mercury puts on a show.
By Fred Schaaf

The May 9th Transit of Mercury
The littlest planet will cross the enormous Sun for viewers in most of the world.
By Alan MacRobert

S&T Test Report: Meade's 10-inch LX600-ACF Telescope
The value of the LX600 comes as much from its timing as from its advanced technology.
By Dennis di Cicco

In the article about adaptive optics, the diagram on page 32 shows a laser beam creating an artificial star. This star acting as a reference for the adaptive optics system.. But don't the atmospheric distortions and turbulence above the telescope blur and distort and bend the laser beam before it hits the sodium layer and create the artificial star? Then this artificial star would be wandering around the sky a little bit, compared to real stars and other objects out there in the universe.

Insightful question! So the laser beam does spread out a bit on the way up. One reference (Aperture Synthesis: Methods and Applications to Optical Astronomy, page 161) says that the fluorescence it creates in the sodium layer can be anywhere from 0.5 to 2 arcseconds wide, with the spread coming both from the laser beam naturally spreading out (since lasers aren't perfect and the photons won't shoot out exactly parallel to one another) and from turbulence in the atmosphere. The key is that it’s only when the laser hits the sodium layer that it causes the sodium atoms to fluoresce, which is what creates the artificial starlight. So while this spot has a finite width, its light now travels down through the same atmosphere as the real star being observed.