Inside the November 2015 Issue 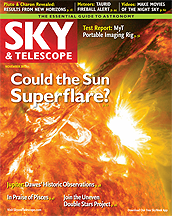 From the Sun to Pluto: A Closer Look at Our Solar System

Our November issue takes us on a tour across the solar system. First stop: the Sun, where we see flares that pack as much energy as they do mystery. But could our Sun ever produce the so-called superlares seen on other Sun-like stars? The answer, explains solar physicist Monica Bobra, is a tantalizing maybe. Then, from the hottest denizen of our solar family to one of its coldest: Pluto and its odd-couple moon, Charon. We've all seen the images beamed back from New Horizons, now dive deeper to learn what those stunning panoramas are telling us about these strange little worlds. Then on to Jupiter, which is beginning to dominate the early dawn hours. Dive deep into the historical drawings by William Dawes', which revealed the king of planets before the age of photography — and can serve as inspiration for your own sketches. And that's hardly the last stop: the November issue also includes a call for observers to join the uneven double-star project led by Sissy Haas and an S&T Test Report on the Paramount MyT imaging rig.

Pluto & Charon: The Odd Couple
After a 91/2-year journey, NASA's New Horizons zipped past a pair of small worlds that couldn't be more different.
By J. Kelly Beatty

Superflares
Astronomers have discovered many Sun-like stars that unleash titanic flares. Could our Sun produce such a flare? Has it already?
By Monica Bobra

The Uneven Double Stars Project
Contribute your data to this ongoing observing endeavor.
By Sissy Haas

Tips for Terrific Time-Lapses
Use these techniques to create stunning movies of the sky turning above scenic landscapes.
By Alan Dyer

What's a Solar Flare?
by Camille Carlisle
Find out what solar flares look like, how they work, and how powerful they can become.

Lunar Librations
Librations and other lunar data for November 2015.

Binocular Highlights: Column #200
To mark the occasion, Gary will answer the oft-asked question: What is his favorite binocular highlight?
By Gary Seronik

William Dawes' Jupiter
A celebrated 19th-century astronomer made remarkable observations of Jupiter and its moons.
By Richard Jakiel