Inside the October 2015 issue 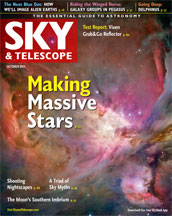 As Orion once more enters the night skies of Northern Hemisphere observers, it's a fitting time to ponder the conundrum of massive star formation — astronomers are just starting to piece together how some of the brightest stars in our night sky came to be. But dwarf stars deserve attention too, and they're getting it from exoplanet searchers. Even as next-gen exoplanet-imaging instruments are coming online to image gas giants in nearby systems, astronomers are hard at work developing the next step: technology to image alien Earths around nearby M and K dwarfs. Take your own venture into astro-imaging with the simplest of equipment when you image nightscapes — Alan Dyer has some tips to help you take some beautiful shots (and don't miss his video showing some sample results for time-lapse techniques). Plus, make sure to see some beautiful dawn conjunctions, venture into the Dolphin and the Swan, and try your hand at catching some Draconid meteors.

Making Massive Stories
Researchers are refining the recipe for some of the brightest stars in the night sky.
By Monica Young

A Few of My Favorite Things
A sense of wonder and a good imagination will aid you in this tour of Pegasus galaxy groups.
By Ted Forte

Secrets of Nightscape Photography
Here are some essential tips for shooting the night sky above picturesque landscapes.
By Alan Dyer

Forming Massive Stars (VIDEO)
Dive into sites of massive star formation that you can see from your backyard.

Going Deep in Delphinus
Peruse additional images to help you navigate the area around NGC 7006.

Lunar Librations
Librations and other lunar data for October 2015.

Legends in Three Directions
The stars of the October sky spell out a trio of ancient tales.
By Fred Schaaf

The Fickle Draconids
Watch for slow, unusual meteors that may show up on October 8 - 9.
By Alan MacRobert

Millions Together
The stars gather close in the southern wing of Cygnus the Swan.
By Sue French