Inside the October 2017 Issue 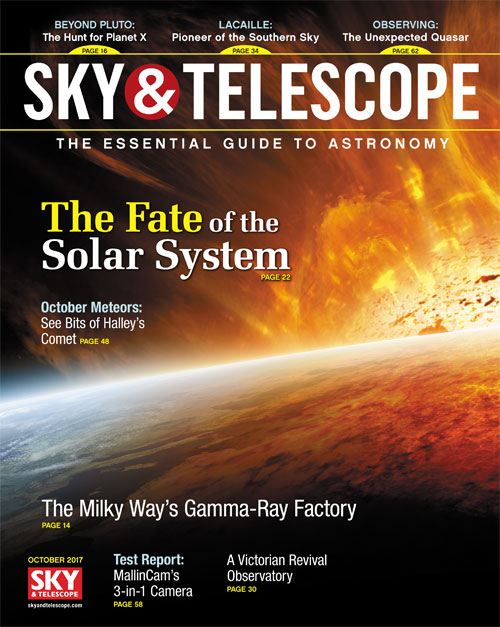 Wait for It: The Future of the Solar System, the Race for the Ninth Planet, and Lacaille's Quest for Southern Constellations

Astronomy changes, as does the universe. Luckily for us, the timescales are much different. As you will read in this issue, the Sun is relentlessly consuming its hydrogen as it ages, a process that will turn it into a red giant in 6.5 billion years, bringing dramatic change to the entire solar system. Meanwhile, astronomers use their time to unravel new mysteries within the solar system, searching for an elusive ninth planet, and our galaxy, unraveling the source of Milky Way’s mysterious gamma rays. Time is also all that stands between modern day astronomers and those of the past, like Nicolas-Louis de Lacaille, who charted the southern skies and created most of its previously unnamed constellations. For amateurs, astronomy also means time: time of enjoyment as they prepare and conduct their observations of R Aquarii, Uranus, Neptune, and variable stars. Enjoy these and other stories in the October 2017 issue of Sky & Telescope.

The Milky Way’s Mysterious Gamma Rays
Is dark matter to blame for a high-energy glow in our galaxy’s core?
By Monica Young

The Hunt for Planet X
Evidence is building that a large world lurks far beyond Pluto and the Kuiper Belt. The race to find it is on.
By Scott S. Sheppard

Written in the Star
The future of our solar system largely hangs on how the Sun ages. Regardless of the outcome, it doesn’t look good for Earth.
By Peter Tyson

A Gentleman’s Observatory
This backyard structure recalls classic tastes of the Victorian age.
By Tim Wetherell

The Father of Southern Astronomy
Lacaille created more of today’s constellations than anyone before or since.
By Brian Ventrudo

16 Pisces, Arp 284 & the Unexpected Quasar
A chance on a 48-inch scope brings an awesome surprise.
By Howard Banich

Ring Found Around a Galaxy’s “Hidden” Black Hole
A team of astronomers has taken a close look at a nearby galaxy — and discovered an unusual structure that sheds light on supermassive black holes’ relationships with their host galaxies.

Nights of the Living Dead — What Stars Leave Behind
Stars leave interesting messes after they die: diamond-studded puffballs, neutron stars, and black holes.

Stellar Splendor
A deepest, darkest sky offers an extraordinary encounter with the stars.
By Fred Schaaf

The Drama-Ridden Couple of R Aquarii
What looks like a normal pulsing red giant has a lot more going on around it. Its next episode of weirdness may begin soon, and variable-star observers are watching.
By Alan MacRobert

The Vagaries of Crater "Tweens"
Some lunar impacts have characteristics that make them neither "simple" nor "complex."
By Charles A. Wood

The Inconstant Star
The joys of observing variable stars are predictable wonderful.
By Sue French