Inside the September 2015 Issue 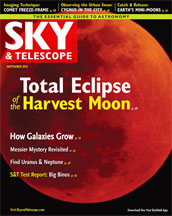 The red light of a harvest Moon sets the perfect mood for unraveling astronomical mysteries. (And of course, read all about where and when to see the eclipse in this issue.) S&T Science Editor Camille Carlisle tackles the conundrum surrounding the beautiful galaxies we see from our backyards — astronomers used to think that cosmic collisions were behind galaxy growth, but now the tables are turning . . .  And new research reinvigorates two age-old puzzles, the 232-year-old "missing" Messier object and the elusive (if not illusive) green glow around the nightside disk of Venus. Plus, in this season of planets, the sky will tempt you to stay up all night with Mercury at dusk, the ice giants at night, and Venus, Mars, and Jupiter putting on a morning show.

How Galaxies Grow
The universe's stellar metropolises rend, chew, and merge with one another. But how important are these encounters in creating the galaxies we see today?
By Camille Carlisle

September's Total Lunar Eclipse
At last, an eclipse of the Moon for the whole western world.
By Alan MacRobert

Earth's Come-and-Go Moons
Astronomers are on the lookout for a smattering of tiny asteroids that get trapped as temporary moonlets around our planet.
By Bruce Dorminey

The Case of the Missing M102
Did a false lead 232 years ago hide the truth about this "nonexistent" Messier object?
By Michael A. Covington

Cygnus in the City
Many features of Cygnus, the Swan, can be appreciated without leaving town.
By Ken Hewitt-White

Comet Freeze
Here's a great technique for stacking your comet photos in ImagesPlus.
By Tim Jensen

Track Triton
Use our interactive observing tool to help you spot Neptune's biggest and brightest Moon.

How to Make Perytons
Read more about the mysterious radio signal with a human provenance.

Lunar Librations
Librations and other lunar data for September 2015.

Flames at Dawn
Look to the early morning for the best showing of bright planets.
By Fred Schaaf

It's Uranus-Neptune Season
The haunters of the outer dark are returning.
By Alan MacRobert