Inside the September 2016 Issue 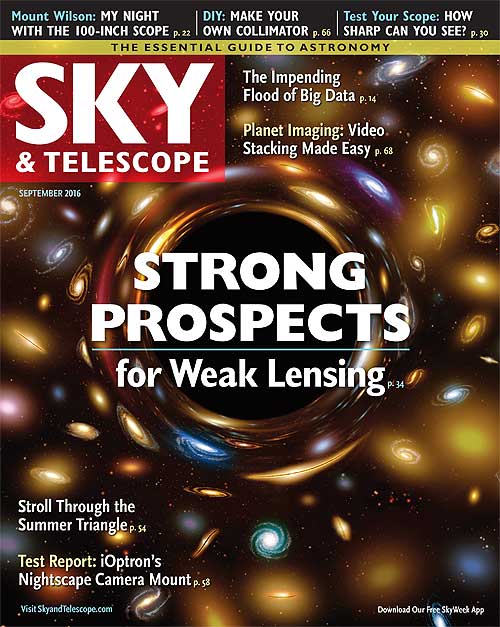 Google "gravitational lensing" and you'll uncover a trove of magnificently distorted galaxies, their images twisted under the spell of gravity. But it's the far tinier warping of galaxy images in weak gravitational lensing that motivates our cover story by S&T Contributing Editor Govert Schilling. Tried-and-true techniques are being applied to a bevy of large surveys with the promise of breakthroughs on dark matter and dark energy. Large surveys like these are also the source of a gathering storm for the astronomical community — Big Data — an issue Editor in Chief Peter Tyson faces in his feature. Big data isn't just for the pros — record video of the Sun, Moon, or planets for sharp images, and an amateur could collect more than 100 gigabytes of data in a single night. Learn how to stack the best frames of your video with only a few clicks. And as always, in this issue you'll find guides to the sky whether your instrument of choice is a 10-inch reflector, a pair of binos, or just your eyes.

Astronomy & Big, Big Data
How will astronomers cope with the tsunamis of raw data soon to pour in from wide-field surveys?
By Peter Tyson

Observing Through a Truly Large Telescope
The author and friends enjoyed a memorable night of observing through what was once the world's largest telescope.
By Robert Naeye

Find Your Dawes Limit
The famous resolving-power rule for telescopes may not apply to you. Try these close double stars to find out.
By Phillip Kane

Strong Prospects for Weak Lensing
Astronomers are mapping tiny distortions in teh images of distant galaxies to study the invisible — dark matter and dark energy.
By Govert Schilling

Planetary Processing with Autostakkert! 2
This freeware takes the drudgery out of stacking planetary videos.
By Emil Kraaikamp

Watch Kuiper Belt Object OR10 (VIDEO)
See Kepler's observations of this icy rock tumbling in the farthest reaches of the solar system.

Lunar Librations
Librations and other lunar data for September 2016.

Map Asteroid Shapes by Video
Join the worldwide project to time asteroid occultations precisely — it's cheaper and easier than ever.
By Alan MacRobert

Lonely Hearts of Summer
Visit some of these less-frequented destinations this season.
By Sue French