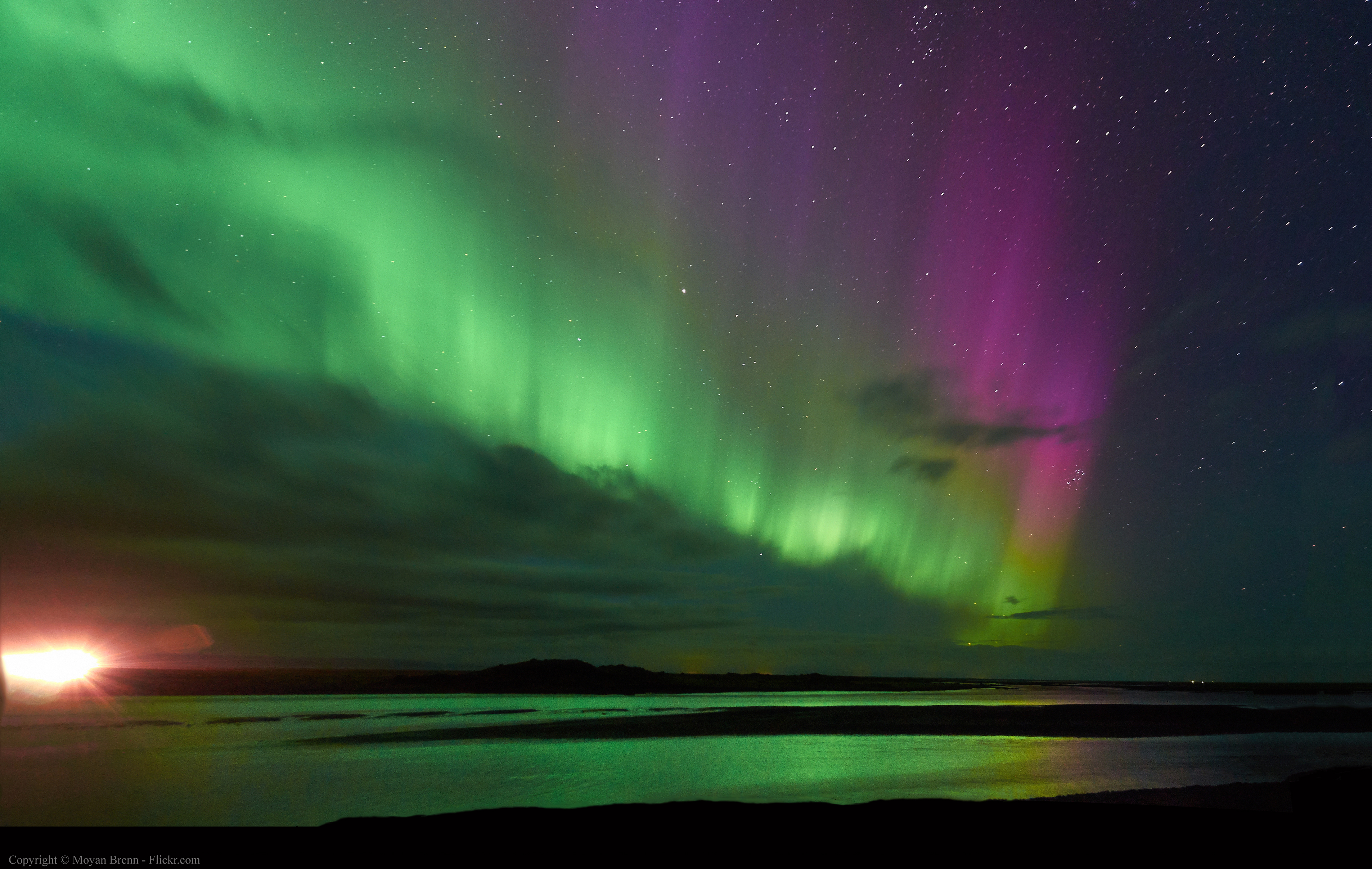 I'm almost embarrassed to admit how commonplace I considered the northern lights to be when I was younger. I grew up in a rural agricultural community, snug against the 49th parallel, where dark skies and a northern exposure provided as many views of the aurora borealis as a kid could want. White beams of light dancing on an early winter night? Check. Psychedelic colors pulsing across the summer sky at midnight? Check. Harvest Moon followed by a festive autumnal sky? Check. Red glow rising over blossoming pear trees in the spring? Check.

If I'd only known. My teen years coincided with the run-up to solar maximum, the time of greatest activity in the Sun's 11-year cycle. While the Sun's energy is always being carried toward Earth by the solar wind, during these periods of peak activity, stronger and more frequent solar storms mean even more charged particles (electrons) burst and stream from the Sun. When those particles hit Earth's magnetosphere, they smash into gas atoms and molecules, "exciting" them and causing them to emit photons, i.e., light up. The colors of the aurora depend on how quickly the arriving electrons are moving, but also on what they encounter in Earth's magnetosphere. Excited nitrogen tends to emit a blue light, while excited oxygen emits green light. These colors can combine to generate fantastically varied aurora — brilliant green, bright white, glowing pink, vibrant magenta.

Unfortunately, leaving home and moving south meant leaving behind this nightly light show, since auroras occur within an oval with a diameter up to 900 miles centered on Earth's geomagnetic poles. They rarely appear where I live now, and when they do, they're so dim they can only be recorded photographically.

That's why I'm looking forward to S&T's fourth annual aurora trip to Iceland this fall. Resting at latitude 65° north, Iceland just skims the Arctic Circle. The ever-shifting aurora oval often envelopes the country, giving us a good chance for a light display even if a strong geomagnetic storm isn't in the forecast. We've scheduled the tour for October because auroras seem to be keyed to the equinoxes: although space physicists aren't yet sure why, stronger displays occur in the spring and fall. Plus, we'll be arriving in Iceland just after new Moon, when the night sky will be at its darkest and best.

I'm excited to share the experience of viewing the northern lights with you, in addition to sharing my knowledge of space weather and auroras. Our base for the tour is Reykjavík, but each night, we'll leave the city lights behind and chase the northern lights together.

We've got a full slate of programming for the daylight hours as well. We'll visit the site of the world's first parliament, the Gullfoss waterfall (Iceland's Niagara), the hot springs of Krisuvík, and the Snæfellsnes Peninsula with its breathtaking Snæfellsjökull glacier. As we go along, I'll share some of my work in early modern astronomy and observatories with you — it may inspire your next adventure! In the meantime, hope to see you in Reykjavík!

Space is limited, so book now! Find out more information on this year's tour here, and book via the Spears Travel page.