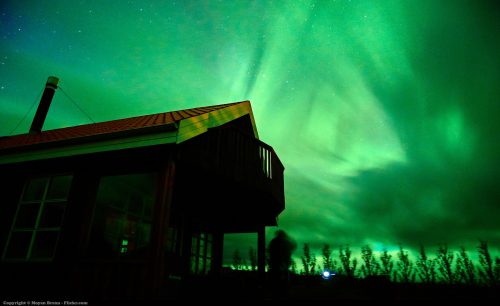 Have you been to Iceland? If not, why not join S&T's 4th annual aurora tour this coming October 2 to 8, 2016? Space is limited, so book now!

Iceland is enchanting. Why? One reason, as I found when I visited last fall, is that you're surprised at every turn. Just when you think you've decided, "Oh, that's Iceland," the country throws a curveball, introduces a paradox or dichotomy, and you're back once again to trying to figure it out.

It's all about fascinating contradictions. As soon as you deplane at the modern airport at Keflavík, you start seeing unreadable signs with unpronounceable words. But just as quickly you realize that it doesn't matter if you can't read or speak Icelandic; everyone speaks English!

You change some money to have a few Icelandic krona ("crowns") in your pocket, but you almost don't need them. Credit cards are accepted everywhere. You see in the airport duty-free shop that woolen sweaters and other high-quality Icelandic products can be pricey. But you discover to your delight that tourists get an automatic 15% discount on all purchases of any size.

The tantalizing incompatibilities continue after you leave the airport. Where are all the cars? Once off the main road to nearby Rekjavík, the capital, you find the roads are very lightly traveled. You remember then that Iceland's entire population is about 330,000 people (the U.S. has 330 million).

You soon discover there are few trees; the whole landscape in the southwest consists of moss-covered lava fields. But then you come upon a beautiful forest, like the one rising near Geysir, the geyser that gave that word to English.

Animals? One word: sheep. There are more sheep than people in Iceland. If you approach them, they scatter. But not the wild-looking Icelandic horses. They come right up to you — or at least two did near the Skogarfoss waterfall when we visited it.

The awe-inspiring glaciers you pass regularly in Iceland appear so placid. Yet you know that active volcanoes lurk beneath them; if they go off, devastating floods will soon follow. In many places, you'll see smoke rising from factories. But it's actually steam from geothermal plants. Iceland is as green and clean as nations get.

Icelanders have a thousand-year Norse history, which has made them stoic and cautious, yet the society is among the world's most progressive. Traditional sod-roofed houses still exist in the countryside, but then there's Harpa, the extravagantly post-modern concert hall in Rekjavík. Harpa would give the Sydney Opera House a run for its money in terms of dazzling architecture.

What about the aurora borealis? Do the northern lights adhere to this variously paradoxical, oxymoronic, never-the-twain-shall-meet nature of Iceland?

Oh yeah. When they're flaming overhead, just when you think you've got them arranged in your sight, they morph into something else. That long, green-tinged strip near the horizon? Going, going, gone. But turn your head in another direction, and there's a broad apron of quivering white that wasn't there the last time you looked, just minutes ago.

Want to have your mind electrified with compelling contradictions, poles-apart sensations, counterintuitive discoveries? Come to Iceland this October with Sky & Telescope.

We'd love to see you in Keflavik Airport on October 2nd!