The gauzy disk of Titan dominates this natural-color composite from the Cassini orbiter taken on May 11, 2011. The bright disk of smaller and more distant Dione looks as if it's attached to Titan. Saturn's disk and rings serve as the backdrop. Click here for a larger, full-frame view. 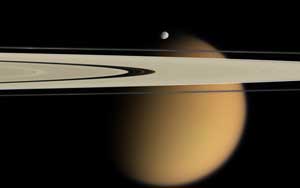 Small Epimetheus crowns Titan in this composite image from NASA's Cassini spacecraft. Saturn's rings stretch across the field of view.

Since NASA’s Cassini spacecraft and its passenger, the ESA’s Huygens probe, arrived in the Saturn system in 2004, revelations about Saturn’s moon Titan have poured in. Unlike the global ocean scientists thought they might find, the largest sand dunes discovered in the solar system cover the moon’s equatorial regions. Seasonal lakes of ethane and methane grow and wane in the polar regions, possibly fed by rivers. A few oasis-like features were recently spotted near the equator, too. There's even a 400-km-long river system on Titan, the longest one found thus far beyond Earth.

As writer Donald Robertson explains in our March 2013 issue, many mysteries still remain. While Cassini has provided strong circumstantial evidence that methane rain peppers Titan’s surface, scientists still don’t understand how the weather cycle works. Below, you’ll find some photos that didn’t make it into the magazine, as well as a couple of videos, including one from Huygens’s historic landing.

Fall to Titan's surface with Huygens: Footage from the Huygens probe as it descended through Titan's atmosphere at first reveals little but orange haze. But as the probe nears the surface a landscape of highlands and dunes comes into focus. Landing happens around 3:55. Make sure you check out all the sidebar data, too! Credit: ESA / NASA / JPL / University of Arizona Also watch this simulated recreation of Huygens's descent from ESA. 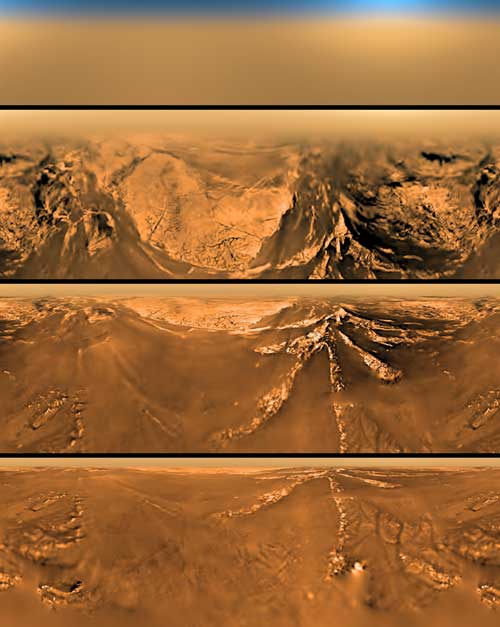 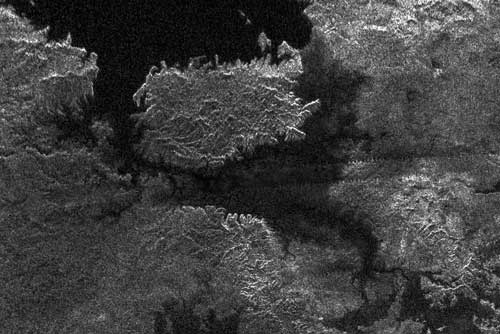 Cassini's radar revealed this island in the middle of one of Titan's north polar lakes in 2007. The island is about 90 kilometers (62 miles) by 150 kilometers (93 miles) across, about the size of the Big Island of Hawaii. The island might actually be a peninsula connected by a bridge to a larger stretch of land. 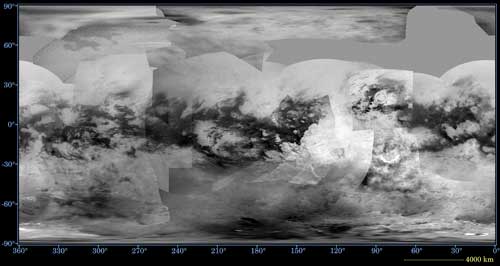 This global digital map of Saturn's moon Titan was created using images taken by the Cassini spacecraft's Imaging Science Subsystem (ISS). Dark areas across the equator are dune fields. The images were taken using an infrared filter centered at 938 nanometers. Because Titan's dense atmosphere scatters light, no topographic shading is visible in these images. The map is an equidistant projection and has a scale of 2.5 miles (4 kilometers) per pixel, although actual resolution varies greatly across the map.

Touring Titan's lakes: The lighting is a bit dim, but this video gives a good sense of the lakes' scale at Titan's north pole (about 1 minute in). Credit: NASA / JPL-Caltech / USGS