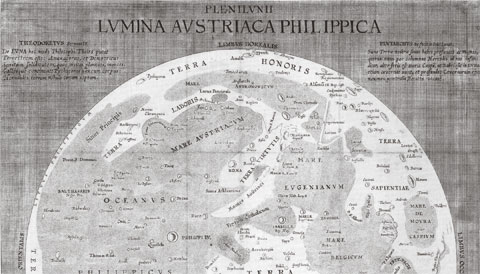 Beginning in 1645, obsessed observers drew maps of the Moon's face in ever-greater detail.

The word lunatic comes from Latin, meaning “moonstruck.” In that context it applies to many of the observers who have devoted intense effort to studying the Moon. We commemorate their work by assigning their names to lunar craters. In this sense I think of the Moon itself as a kind of planetary pantheon — the Lunar Hall of Fame — and although its opening hours are variable throughout the month, admission is free.

So whom do I consider a lunatic? Many scholars, from Lucretius in ancient Greece to Galileo and Newton, considered the Moon in their studies — but it was not the major part of their life’s work. Rather, I reason that anyone who drew a detailed map of the Moon must have spent years observing it — and thus qualifies. Here, then, are a few of the nearly two dozen craters named for passionate lunar mappers whom I particularly like because of the stories associated with them. By observing these lunatics’ craters you can track the highpoints of telescopic lunar exploration.

The craters named Langrenus, Hevelius, and Riccioli honor three pioneering lunar cartographers. Their works from 1645 to 1651 also introduced names for lunar features. Michael Flor­ent van Langren came first, and despite the warning printed on his map not to change any of the identifications he gave “under penalty of censure,” the two lunar mappers who followed him did exactly that. Langren had named most craters for Catholic royalty and saints, but Johannes Hevelius used terrestrial geographic features, and Giam­battista Riccioli — despite being a priest — selected an assortment of ancient and contemporary scientists and philosophers. Riccioli’s names remain (S&T: May 2015, p. 26), while those of his predecessors are forgotten.

Without a doubt the most beautiful maps of the Moon were created by professional artists. First was Claude Mellan, a famous Parisian illustrator who drew two quarter-phase maps in 1635 that look nearly photographic. He combined them into a full Moon view, nudging them latitudinally to compensate for different librations. No lunar feature commemorates Mellan, but Pierre Gassendi, the scientist who asked him to make the drawings, has a splendid crater.

Perhaps the most accomplished artist fascinated by the Moon was John Russell. Having been repulsed by the poor quality of many existing lunar drawings, he produced more than 200 sketches over 40 years, combining them into gores for a glorious lunar globe (1797) and later two maps of the Moon (1805). His works represented the lunar surface more realistically than any previous attempt.

The first astronomer to devote much of his career to the Moon was Johann Hieronymus Schröter, who studied Venus (S&T: Jan. 2017, p. 52) and other worlds, but who is most famous for his assiduous observations of the Moon over nearly 20 years. Although inelegant, his drawings initiated our modern interest in studying individual features. Schröter investigated rilles, mare ridges, and the lunar limb, and he measured elevations of mountains and craters. His results were published in two massive books titled Selenographische Fragmente — a recognition that he never combined his 75 detailed drawings into a complete map. The rim of Schröter’s lunar crater, like his studies, is fragmentary.

A German duo, Wilhelm Beer and Johann Mädler, published their magisterial lunar book and map in the mid-1830s. Beer, a wealthy banker and amateur astronomer, owned the observatory that Mädler used to observe and map the Moon, completing the work in two years.

Mädler’s approach and results were scientific. Based on observations, he drew many conclusions that stand today: The Moon has no atmosphere, maria are not liquid, rays have no relief, craters are much larger than terrestrial volcanoes, and rilles are unlike Earth’s rivers. He also realized that some peaks at the lunar south pole are always in sunlight (S&T: June 2017, p. 53). Mädler famously concluded that the Moon was “no copy of the Earth.”

Craters bearing the names Beer and Mädler are, appropriately, 10 km and 28 km wide, respectively. The female mathematician and astronomer Wilhelmine Witte used Mädler’s map to create a lunar globe in 1838, and their meeting led to Mädler marrying her daughter. There’s no lunar crater named Witte, but she’s the namesake of a volcanic feature on Venus.

Julius Schmidt, who flourished from the 1840s through the early 1880s, is a textbook example of lunar addiction. As a young teen he obtained a copy of Mädler’s map, and the Moon became his scientific focus for the rest of his life. Schmidt’s obsession culminated in the publication in 1878 of the largest (77½ inches across) and most detailed map of the Moon. He compulsively counted its 32,856 craters to demonstrate his map’s overwhelming superiority compared to all of its predecessors.

By the early 1900s a growing number of lunar maps carried different names for the same craters. An English woman, Mary Blagg, working under the guidance of Samuel A. Saunder, published a concordance of lunar nomenclature in 1912, and in 1935 she and Karl Müller published the International Astronomical Union’s first catalog and map of the Moon. The catalog proved very useful; the map was ugly. Blagg, who did nearly all of the work, is remembered with a crater merely 5 km wide — while her male colleagues have craters with diameters of 22 and 44 km, respectively.

In the 1960s and early 1970s Gerard Kuiper and his colleagues completed the era of telescopic lunar mapping by publishing four comprehensive photographic atlases. Craters are named for Kuiper on the Moon, Mars, and Mercury. His colleague, the renowned lunar expert Ewen Whitaker, died in 2016, and I hope his name will appear on a crater after the required three-year waiting period has passed.

Interesting that Percy Wilkins' maps aren't mentioned. These culminated in the 300" map published in 1951. Are these maps now disregarded for some reason? I recall that, in the 60's and 70's, especially in the UK, the Wilkins maps were regarded as the pinnacle of lunar mapping in the pre-space era.

Hi Peter - A number of lunar mapmakers were not mentioned including Neison, Fauth, Goodacre and Wilkins - an exhaustive list is given at http://the-moon.wikispaces.com/Lunar+Maps
Wilkins' maps suffered from poor draughtsmanship and seemed to make little impact other than on British amateurs. His large map was "the pinnacle" in that it contained the largest number of features but in many places in the highlands and the limb it was unreadable. In working with Dai Arthur and Ewen Whitaker in the 1960s to create the System of Lunar Craters catalog and maps we relied on the maps of Beer and Mädler, Neison, Schmidt and Blagg and Muller, for they gave official nomenclature. Most of Wilkins' names were never approved.

Oops, forgot to say that Tychocrater is the login name of Chuck Wood.

I seem to remember an article in a past issue of S&T about someone in England who produced Moon maps so detailed he had to have used a telescope. This despite the fact it was long before the telescope was supposed to have been invented. Anyone else remember that?

Hi Patrick - I am aware of one crude lunar sketch map made before the use of a telescope by William Gilbert in the early 1600s: http://the-moon.wikispaces.com/Lunar+History+-+1600s
It includes outlines of a few maria and dark floored craters.

The other early drawings, a few months before Galileo, were by Thomas Harriot. http://galileo.rice.edu/sci/harriot_moon.html
His sketches were artistically and scientifically far inferior to Galileo's and not being published made no impact on history.
Chuck Wood

I remember seeing for sale ads in the back of Sky and Telescope for live video tours of the moon's surface captured with a telescope years (decades?) ago. I believe they were for sale on VHS tapes. I've tried to search For Those ads in the DVD set of magazine back issues without success. Does anyone else remember seeing these ads and approximately what time frame they were for sale? I regret never having ordered them when the ads were current. I would enjoy viewing them when skies are too cloudy to scan the moon with my small telescope or binoculars.