M17: The Nebula With Too Many Names 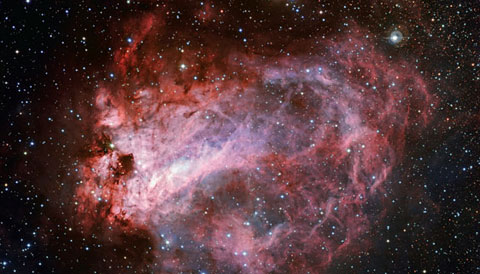 Follow this observer's guide to find one of the best H II regions in the night sky. Messier 17 has at least five proper names — Omega Nebula, Horseshoe Nebula, Checkmark Nebula, Swan Nebula, and the Lobster Nebula. Why so many?

Sir John Herschel started off the story by comparing M17 to the capital Greek letter Omega. His 1833 sketch shows something like an Ω with a long tail, and given his immense intellect, I can see why he chose the name. But he used the names Omega and Horseshoe interchangeably, and his sketches from the first half of the 19th century accentuate the horseshoe part of the nebula. Although the shape of M17 doesn’t conjure up an Omega or a horseshoe for most 21st-century observers, both names are still widely used.

On the other hand, I totally get the Checkmark name — that’s what M17 looks like in my 8-inch scope from home. And I could see it as the Swan with my old 12½-inch Dobsonian.

Now, turn your head upside down to see why observers in the Southern Hemisphere call it the Lobster Nebula. Pareidolia — the phenomenon of seeing a familiar pattern where there is none — really depends on your orientation.

Cool, right? So even though M17 has too many names, at least they’re a good selection from which to choose.

M17 is a bright H II region in the Milky Way with a colossal but hidden star cluster cataloged as NGC 6618. It’s also the brightest portion of a giant molecular cloud (GMC) located approximately 6,000 light-years away in the Sagittarius spiral arm. That makes the optically visible portion of M17 roughly 15 light-years in length.

M17 has nourished three waves of star formation. The first formed roughly 2,000 stars between 2 and 5 million years ago, followed by the rapid compression of gas and dust. That increase in density, nearly 2 million years ago, kick-started the formation of approximately 12,000 more stars and continues today, making up the huge NGC 6618 star cluster. Unfortunately, these stars lie mostly hidden within the H II gas of M17 and are best seen in infrared.

A third phase of star formation is ongoing in the outer regions of M17’s GMC, involving about 1,000 stars.

The massive O-class stars in NGC 6618 blast out intense ultraviolet radiation that excites the hydrogen gas in the M17 molecular cloud to emit visible light, creating the emission nebula/H II region we’re so fond of naming.

All but one of M17’s names implies a loop somewhere in the nebula, which represents the head and neck of my favorite shape, the Swan.

Although visually smaller and fainter than the body, what we see as the gracefully curved head and neck of the swan is actually the most massive part of the nebula. The brightest portions look like a vaporous number 2 to me, and yet this is the area that inspired the Omega and Horseshoe names.

The most dramatic part is actually the black area inside the curve of the 2 — on the best nights it looks almost impossibly black. This dense portion of M17’s molecular cloud creates a memorably high contrast region with the bright head and neck curving around it.

On close inspection I was able to see two faint stars in the foreground of the darkness — close to its south and northwest edges. I also noticed a rather sharp corner on the inside edge near the top of the 2.

Farther down the neck, and almost on the border with the black molecular cloud, shine three rather prominent stars, which are opposite a star of comparable brightness right near the southern end, or top, of the 2. These are some of the visible stars of the NGC 6618 cluster. Just east of the center of the three stars is a small, bright knot of nebulosity that I see only on the most transparent nights.

Continuing the curve past the top of the 2 are two subtle, not quite parallel streaks that flow into a faint haze that circles back to the base of the 2. This faint nebulosity completely encloses the dark area inside the curve of the 2 and reinforces its utter blackness. Also note the two, equally faint, feathery streaks pointing south from the head.

Above the 2 is a small puff of nebulosity with a fairly prominent star that crowns the head of the swan. There are other puffs of fainter nebulosity surrounding the head, but this is the most obvious and picturesque.

Extending mostly east-west, the swan’s body is the brightest and most detailed portion of M17. It’s also the most fun area to observe at various magnifications, especially around the two brightest areas along the southern edge of the body. The one closest to the swan’s neck and head is shaped much like an elongated heart.

The next brightest area lies closer to the tail end of the body and, with pareidolia now in full force, I can even conjure up a wing. Boosting magnification brings out its undulations and ragged outline, and a thin extension — the wing tip — curving toward the southeast. Its shape is reinforced by an arc of stars along its southern border.

There’s a longer, beautifully curved extension off the eastern end that gracefully arcs toward the southeast that makes an excellent tail. It shows up best with averted vision.

Although we can’t see much of the NGC 6618 cluster, its main concentration of stars is located in the crook between the swan’s neck and body. If human vision was sensitive to near-infrared wavelengths, this might be the most spectacular part of M17.

North and east of the body ranges a complex of much fainter loops and patches of nebulae. There’s a lot of subtle detail here, especially under ideal skies. Look for small, subtle dark patches as well as bright ones. The most prominent are off the northern edge of the swan’s body — use higher powers to see them best. A nebula filter will give the fainter wisps and dark areas greater contrast and will, for that matter, boost the contrast of the entire nebula.

East of the tail is a large, faint loop that arcs south to north at about 90 degrees to the body of the swan. It can be surprisingly prominent on a good night but doesn’t quite connect to the tail. The northern end of the arc leads to the patches of nebulae just north of the swan’s body, which in turn connects to the base of the neck — and suggests a wake through water, completing the illusion of a swimming swan.

However you see M17, it’s a marvelous H II region with exceptionally contrasting dark nebulae. Even the Orion Nebula doesn’t have an area with such contrast. Unfortunately, M17 and M42 are never visible at the same time for a direct comparison, so take good notes, make a sketch or two, and see for yourself. It’s possible M17 will become your second favorite H II region of the Milky Way, regardless of what it looks like.

To learn more about Messier 17 and view the author's earliest sketch of the region, click here.