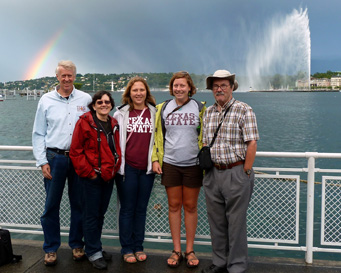 In the November 2011 issue of S&T, Texas State University physicist Don Olson, and four coauthors, discuss the origin of the legendary horror novel Frankenstein, written by Mary Shelley. Using astronomical references in the written accounts of Shelley and her companions, and by investigating the site on the shores of Lake Geneva where Shelley conceived the novel, Olson and his colleagues have solved some of the mysteries surrounding Frankenstein. In particular, the authors have produced a chronology that is consistent with the phases of the Moon and all the written accounts, and cast considerable doubt on scholars who have questioned the credibility of Shelley’s stated recollections of how she conceived the idea for the story during a nightmare in June 1816.

Like most articles that are published in S&T, there wasn’t enough space to publish all of the good photos associated with the article.