Inside the Night Sky March/April 2007 Issue 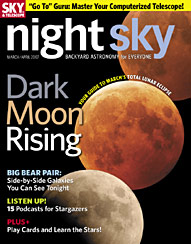 The Sky Tonight March: Carnivores Rising
The Great Bear, Lion, and Sea Serpent stalk upward together in the eastern sky. By Alan MacRobert

The Sky Tonight April: Two Planets on High
Venus grabs the eye in the west, while Saturn shines high in the south. By Alan MacRobert

Constellation Close-Up: Hydra and Corvus
The huge but faint Water Snake carries the small, bright Crow on its back. By Tony Flanders

Take A Star-Hop: Wonders of the Crab and the Lion
Explore the treasures of these zodiacal neighbors. By Sue French

Science Spotlight: Galaxies of the Great Bear
The Big Dipper's bowl is your guide to the sky's best galaxy pair. By Ken Hewitt-White

Other Worlds: Explore the Lunar Terminator
Breathtaking views of the Moon abound wherever day meets night. By Andrew Chaikin

It's Eclipse Time
This March, for the first time in 2½ years, the Moon goes dark. By Fred Schaaf

The Deceptive Sky
What you see isn't necessarily what you're really seeing. By Dennis L. Mammana

Skyscapes
Beautiful images taken by backyard astronomers around the world.

read now
Straight Talk: A Trip to the Galaxy Zoo
Every galaxy has a story to tell. By Phil Plait

read now
Skill Builders: Introducing the "Star Deck"
It's a game, it's a sky-learning aid, and it's pure fun! By Michael K. Shepard

Choosing & Using: Your "Go To" Survival Guide
Is your telescope's computer driving you nuts instead of driving you around the sky? By Rod Mollise

read now
Gearing Up: 'Podding with the Stars
Let your MP3 player be your personal sky guide. By Andy Cheng

In Focus: Our Creative Crew