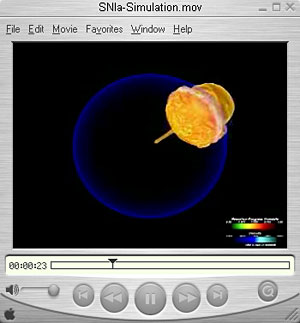 Click on this image to pull up a 2.5-megabyte QuickTime movie showing parts of a supercomputer simulation of an exploding white-dwarf star. If you don't already have QuickTime on your computer, you can download a free copy from .

In the July 2007 issue of Sky & Telescope (page 32), science writer David S. Stevenson describes some of the recent progress made by astronomers in figuring out what causes Type Ia supernovae. Most supernova explosions signal the deaths of short-lived massive stars, but Type Ia blasts come from old white dwarfs, which are the Earth-size remnants of longer-lived low-mass stars like our Sun.

As Stevenson explains, an isolated white dwarf simply cools and fades. But a white dwarf in a binary star system may come to a violent end. If it accretes enough material from its stellar companion to reach the so-called Chandrasekhar limit of about 1.4 solar masses, the little star will no longer be able to support its own weight. It will collapse, heat up, and ignite its entire bulk in a nuclear conflagration that will briefly shine as bright as a whole galaxy of stars.

Click on this image to pull up a 2.5-megabyte QuickTime movie showing parts of a supercomputer simulation of an exploding white-dwarf star. If you don't already have QuickTime on your computer, you can download a free copy from Apple.

That's the theory, anyway. To convince themselves they're right, astronomers have been programming computers with all the relevant physics equations and seeing what happens. Until recently, they couldn't get their simulated white dwarfs to explode. But as computer power has increased, the sophistication of astronomers' models has increased too. Finally, by doing their calculations in three dimensions and taking into account turbulence — something not possible before the advent of multiprocessor supercomputers — astronomers have succeeded in getting simulated white dwarfs to go boom.

Curiously, the initial stages of the inferno are sometimes decidedly asymmetric. If real white dwarfs explode this way, it could explain some of the differences observed among Type Ia supernovae.

The video covers the first few seconds of a Type Ia supernova. The first sequence shows a two-dimensional slice through the center of an exploding white dwarf. The rings are contours that mark differences in density, and the gray tones represent fuel and ash that is enveloping the star. The second, longer sequence shows a three-dimensional simulation of the blast. Areas of yellow and orange represent flame popping out of the star, while the blue circle marks the star's surface.