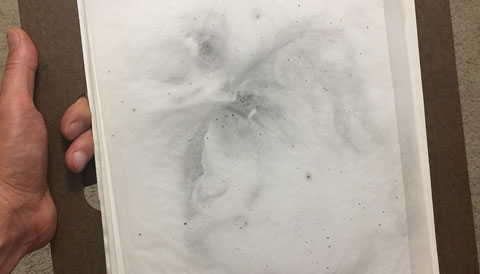 Learn how to sketch the Orion Nebula with Howard Banich — and truly see the detail of this celestial wonder!

Christiaan Huygens was first to publish a drawing of M42 in 1659. Since then many excellent renderings have been made, with the finest, in my opinion, coming from John Herschel. His 1838 monograph of the Orion Nebula is still a wonderful thing to behold and is a must-see for anyone who has ever wondered how much this highly skilled observer could see with his 18-inch speculum mirror telescope.

It also shows how much telescopes and observing techniques have progressed in the 179 years between the two renderings.

Herschel’s goal for his M42 monograph was to make it accurate enough for future astronomers to determine if the nebula had changed over time. He began by plotting the brighter stars by measuring their relative separations with a micrometer fitted to a small telescope. He laid them out in a fashion like a surveyor of his time would measure a plot of land, so each star would be accurately placed in relation to its neighbors in a series of interlocking triangles. He called this a skeleton, and his descriptions of this technique make it clear it was a terribly difficult process.

Once the skeleton was complete, he added the nebulous details and fainter stars over many nights until he was satisfied the drawing was as accurate as he could make it. Although he was exceedingly mindful of accuracy he also captured the beauty of the Orion Nebula in a way few drawings have ever done. Take a moment and look closely, and appreciate how a master did it 179 years ago.

And yes, that is quite a coincidence.

How I Did It

I too was interested in accuracy, but only for my own enjoyment. I just wanted to sketch all the detail I could see through my 28-inch scope and end up with a drawing I’d be proud of. So it’s all for fun, but I did face two difficulties – first, the sheer density of detail intimidated me, and M42 overflows the field of view of my lowest power eyepiece. Make that three difficulties, because cloud cover in western Oregon during the fall, winter, and spring offers precious few observing opportunities.

To get started, I reminded myself that a big drawing like this is actually a series of little drawings that overlap. With that in mind I carefully placed the brighter stars of M42 and M43 on my sketching clip board paper so they’d anchor the drawing and help constrain the proportions of the nebula. Although similar in intent to Herschel’s process, I used a photograph to trace the locations of the brightest stars - which sounds like cheating until you try doing it by eye with this many stars. It was quick and easy to do this at home during the day.

Then, while at the eyepiece, I roughed in the broad outlines of M42 and M43 relative to these accurately placed stars, and double-checked the proportions to make sure everything would end up in their correct positions. This took roughly the first three hours of eyepiece time before I was satisfied I was on the right track.

Preparation is a drag, but without it an object that overflows the eyepiece is difficult to draw well. The temptation is to start drawing the most attractive details right away, but for me this often ends up with the overall proportions being out of whack.

Perhaps it’s not obvious, so I’ll mention that a big, highly detailed object like the Orion Nebula must be drawn on a big sheet of paper. Two reasons - first, the smallest details should be drawn at a scale large enough to do them justice, and second, there must be enough room on the paper for the entire object to fit comfortably.

Because there’s so much detail in the Huygens region alone I soon decided to make a separate sketch of this area, and make finished drawings of both on separate sheets of 18-inch x 24-inch drawing vellum, just like my other large drawings. My first attempt at the Huygens region ended after spending several hours of eyepiece time on it, only to find the proportions were off – I hadn’t traced the stars first like I did for the M42 and M43 sketch. Aggravated at myself for trying to eyeball the sketch, I started again, this time following much the same process I used for M42 and M43.

Once the foundations were set I began adding details of the nebula and fainter stars as they became visible. I worked my way around the nebula until I’d filled in the major details and had rough sketches that were, to my eye, a decent approximation of what I had seen.

From that point on I added finer and more subtle details. Together, these drawings have taken approximately 20 hours of eyepiece sketching time, not to mention the many hours of preparing the finished versions presented in the December 2017 issue of S&T. This is by far the most time I’ve spent drawing a deep sky object and to my surprise I don’t feel like either drawing is finished yet. A great night almost always reveals new details, so I may never think of them as finished.

All sketching at the eyepiece was done from various dark places in Oregon and northern California. I used magnifications of 131x (Explore Scientific 25mm 100 degree) and 155x (TeleVue 21mm Ethos) to draw the overall shape, 253x (13mm Ethos) for most of the nebulous details, and 408x (8mm Ethos) for the fainter stars near the Trapezium and the finer details of the Huygens region. I used a Paracorr 2 (P2) with all these eyepieces.

I didn’t use nebula filters while sketching, so these drawings represent a natural view of the Orion Nebula.

I also made a small scale sketch using my wife’s 8-inch f/3.3 travel scope a few years ago - from the visitor’s center on Mauna Kea of all places. It certainly proved it was impossible to draw the smallest details of such a large object in my small notebook, but it also showed how much could be seen with an 8-inch telescope under nearly perfect conditions.

I didn’t plan to sketch the Orion Nebula with the 8-inch travel scope before heading to Hawaii, but my first glance on the first night on Mauna Kea convinced me I had to. The clarity and amount of detail was astonishing, far exceeding what I’d seen previously in any 8-inch scope. Plus, this was the scope’s maiden voyage and a sketch would be a great souvenir.

Because I could easily fit the entire object in one field of view I approached this sketch the way I normally sketch deep sky objects. I began at the eyepiece by drawing the broad outlines of the nebulosity, and adding stars only when I felt I had the overall proportions mostly correct.

What astonished me most was that I was seeing nearly as much filamentary detail and color as I normally do back home with the 28-inch. The clarity of the sky in the mid-Pacific Ocean at 9000 feet is amazing, but I think the context provided by the wider field of view also helped boost contrast. I used 36 x (21mm Ethos with a P2) and 59x (13mm Ethos and P2) to make the sketch although it took 96x (8mm setting on TeleVue’s 24mm to 8mm zoom eyepiece) to see the E and F stars in the Trapezium.

Perhaps my biggest surprise is that I made this sketch in two hours on one night. I cleaned it up the next day to better reflect what I saw, but it’s a rare thing for me to make a sketch with this much detail in such a short time. Regardless, compare it to my 28-inch drawing and you’ll see I captured most of the same details. Location, location, location.

That begs the question though – what would I see with the 28-inch scope on Mauna Kea? It’s unlikely I’ll ever find out, but it’s certainly fun to think about.