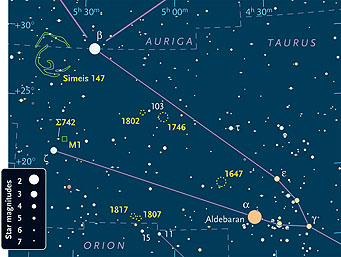 This article lists all known errors in issues of Sky & Telescope for 2012. See also the errata listings for other years.

Page 36: Sirius B was discovered by Alvan Graham Clark, not by his more famous father Alvan Clark, as implied in the box in the article Great Winter Double Stars.

Page 60: A subtle layering error in Adobe Illustrator caused the three brightest stars in the chart on page 60 of the Deep-Sky Wonders column to be overprinted, rendering them very hard to see. Click here to download a corrected chart.

Page 45: The all-sky chart on pages 44-45 mistakenly shows Mars just above the western horizon. In fact, Mars is not visible on July evenings

Page 60: The article "Beyond the Familiar Veil" used red for the highlighted objects, making it unusable by red flashlight at night. A corrected version is available in PDF form at SkyandTelescope.com/BeyondVeil.