Inside the January 2014 Issue 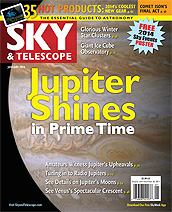 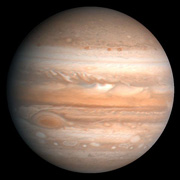 The Frozen Neutrino Catcher
A gargantuan observatory hidden beneath a kilometer of ice looks for signals from some of the universe's speediest particles.
By Govert Schilling

Tuning in to Radio Jupiters
The race is on to find the first radio waves from a world beyond our solar system.
By Yvette Cendes

Jupiter Since Galileo
In recent years, amateur astronomers have made many of the biggest discoveries on the solar system's biggest planet.
By Dean Regas

Comet ISON's Final Act
Comet ISON might be putting on a gorgeous display as you read these words . . . or maybe not.
By Robert Naeye

The Messier Open Clusters of Winter
Bright, beautiful, and easy to locate, these old friends are always worth revisiting.
By Rod Mollise

Hot Products for 2014
Our 16th annual roundup of Hot Products highlights the most intriguing new astronomy gear in the worldwide market.
By the Editors of Sky & Telescope

Sketching the King of Planets
Learn to see more detail on Jupiter by drawing at the eyepiece.
By Michael Rosolina 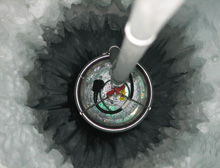 Jupiter Watchers
Join these organizations to report the next storm or meteor smash on Jupiter.
By Robert Naeye

Radio Jupiter
NASA's Radio Jove project gives you the tools to see Jupiter in a different light.
By Monica Young

Science from the South Pole
Learn how scientists built IceCube and other Antarctic observatories.
By Govert Schilling

Lunar Librations
Librations and other lunar data for January 2014.
By Sean Walker

The Seven Sisters
The sky's finest naked-eye star cluster is always worth another look.
By Fred Schaaf

Jupiter in Your Telescope
Get the most from the time you spend with the planet king.
By Alan MacRobert