Inside the March 2014 Issue 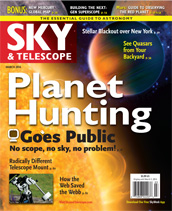 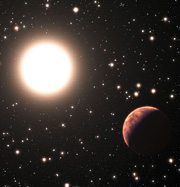 How You Can Find An Exoplanet
Using the Planet Hunters website, citizen scientists are adding to Kepler's treasure trove of new worlds. You only need a computer, an internet connection, and enthusiasm.
By Meg Schwamb

How to Build a Giant Telescope
Construction of the world's largest ground-based optical telescope takes astronomical engineering to the next level.
By Robert Zimmerman

Asteroid to Occult Regulus Over New York
Millions of viewers can see one of the brightest stars in the sky black out when an asteroid crosses in front of it.
By Steve Preston

The Origin of Stacking
Modern astroimagers owe a debt to the pioneers at the Lowell Observatory.
By Klaus Brasch 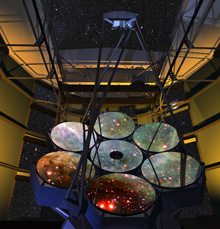 The Megatelescopes are Coming
See the progress on three mammoth telescopes currently in development.
By Monica Young

Lunar Librations
Librations and other lunar data for March 2014.
By Sean Walker

The Red Planet Approaches
Mars doubles in brightness during the month of March.
By Fred Schaaf

Changes on Mars
The nearby Red Planet displays remarkable changes every apparition.
By Sean Walker