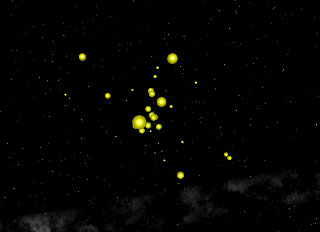 Click above to watch the stars of the Hyades Cluster separate from the unrelated stars in Taurus.

Click above to watch the stars of the Hyades Cluster separate from the unrelated stars in Taurus.

In 1997 scientists associated with the Hipparcos satellite published a 3-D map of stars in the Hyades cluster. It was the first time that the structure of a star cluster had ever been determined accurately. The paper was published in a stuffy academic journal, but Anthony Brown, a researcher at the University of Leiden, made the results accessible to the general public by adding a fourth dimension: time.

Brown has created several movies showing the the Hyades stars in motion. In his models, stars are portrayed as equal-sized globes, so that nearby stars appear larger than more distant ones. In the image at upper right, all the major stars of the constellation Taurus are shown as we would see them if they were large enough to appear as more than simple points of light. The closest star is Arcturus, and the Hyades stars lie farther away, at twice its distance.

If you click on the image, you will see the stars of the Hyades cluster drift off together to the lower left, while the unrelated stars, including Arcturus, fly off in all directions. The entire sequence of events will require less than 100,000 years.

Click above to watch the Hyades stars orbit around the cluster's center.
Anthony Brown[/caption] In the second image, we've zeroed in on the Hyades cluster. We're not on Earth any more — instead we're standing right outside the cluster and moving with it. If you click on the image, you will see the Hyades stars rotate around their common center of mass. The time-scale is much longer now, measured in millions rather than thousands of years. The actual motions of the individual stars are somewhat hypothetical; we can't measure their positions and velocities accurately enough to project them that far into the future with any certainty. But there's no doubt that the general picture is accurate. For more information, see Anthony Brown's website.