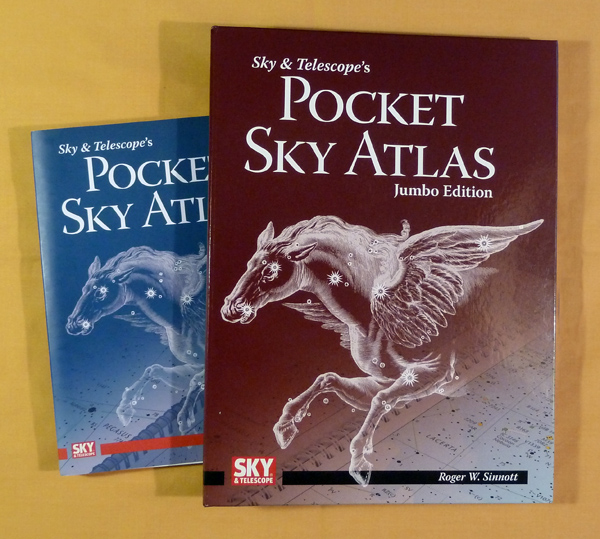 The notebook-size Jumbo Edition has stiffer covers and spine. It can open flat to show a two-chart spread, or even fold back on itself to show one chart at a time.

Okay, okay — it hardly fits in your pocket! The pages of our new Jumbo Edition, after all, measure 8 by 11 inches. But we kept "pocket" in the title for continuity and name recognition. The original Pocket Sky Atlas, introduced in 2006, has proven wildly popular for use with portable telescopes. The new version covers the whole sky with the same 80 charts, magnified to 132 percent. For us to give it a jazzy new name would be downright misleading.

So just to be clear: The Jumbo Edition plots the same 30,796 stars to as faint as visual magnitude 7.6 and the same 1,500 deep-sky objects as the original Pocket Sky Atlas. All of the sky's showpieces for binoculars and small telescopes are in it, along with a thousand others that will challenge 4- to 8-inch telescopes.

What the Jumbo Edition really brings is a new level of readability in poor light. The larger star dots, deep-sky symbols, and sans-serif lettering are a terrific boon for consulting the charts under the dim glow that observers prefer, to preserve their night vision (dark adaptation). Labels now have a type size like the text in Sky & Telescope magazine. If this doesn't seem unusual, take a look at almost any other star atlas on the market today. You'll wonder (as we did) why their charts have such ridiculously tiny lettering!

The larger pages called for a beefier, stiffer binding, but its unique construction still lets you fold the book completely back on itself. And when you hold it in one hand, the page you're looking at lies perfectly flat instead of flopping down — which leaves your other hand free to press a slewing button or tweak the focusing knob of your telescope.

For this new edition, we welcomed the chance to add more close-up charts of high-interest star fields. Along with the original four (Pleiades, Orion's Sword, Virgo Galaxy Cluster, and Large Magellanic Cloud), we now depict attractive regions in Monoceros, Cygnus, Sagittarius, and Scorpius, plus galaxy-rich fields in Ursa Major and Leo. These charts, a new preface, and a slightly reorganized text give the new book 136 pages, compared to the original 124.

The new edition also keeps another popular feature of the Pocket Sky Atlas: its sensible chart layout. All facing charts form a continuous spread, and successive spreads trace a gore of sky that runs all the way from north to south. At any given time, one such gore corresponds to the swath of sky stretching high overhead, so all the objects best placed for telescopic viewing are grouped within a few adjacent pages in the book.

(This contrasts with the layout used in nearly all other atlases, where the pages follow strips of equal declination around the sky. Unhelpfully, that puts up to half of each strip below your horizon at a given time.)

In short, the Jumbo Edition is all about a rewarding experience under the night sky. Our deep-sky targets test the limits of human perception — the tools we use should aid that quest.

I welcome this larger edition of this outstanding atlas! As I'm getting older (and relying on my bifocals for reading atlases) the smaller size of the PSA has become somewhat difficult when using a dim red flashlight at the telescope. So the new version should be a nice upgrade and I'll be buying one as soon as it becomes available. I would like to request some improvements however. How about a laminated version or one with plastic pages for those of us observing in dewy conditions? Also, the Kindle version of the original PSA is awful! It's too small to be really useful on a small tablet or iPhone, and the resolution is very poor when viewed on a bigger screen such as the iPad. Many of us are now using tablets to guide our scopes (Sky Safari being an excellent product to drive a go-to scope) and it would be wonderful to also have a decent Kindle version of the PSA on our larger tablets, running simultaneously in split-screen view. PLEASE consider improving the Kindle version of the PSA so the resolution matches that of the larger tablets (think iPad Pro here). I would happily pay good $$$ for an upgraded Kindle version of the PSA!