The Mystery of Dark Energy: An Interview with Richard Panek 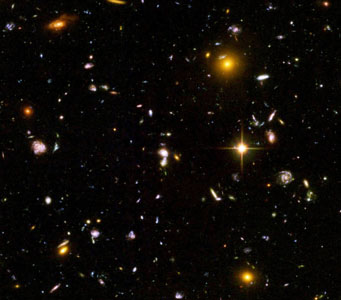 This section from the Hubble Ultra Deep Field shows galaxies whose light has taken more than 90% of the age of the universe to reach us. Surveys of such distant galaxies reveal that the universe is expanding at an ever-faster rate.

Every day some team of astronomers announces some kind of new discovery. Most of these results are of interest to people working in particular field of research, but aren’t new or noteworthy on a broader level. Sometimes the claims are so big they generate newspaper headlines, but they later wither away when scrutinized by other scientists. But every now and then, maybe once per decade, astronomers make a big announcement that not only survives intense skepticism, but that shakes the foundations of human understanding of the universe.

This section from the Hubble Ultra Deep Field shows galaxies whose light has taken more than 90% of the age of the universe to reach us. Surveys of such distant galaxies reveal that the universe is expanding at an ever-faster rate.

Such was the case in 1998 when two competing teams of astronomers announced evidence that the expansion of the universe is accelerating. The prevailing wisdom of the day said that gravity should be slowing down cosmic expansion, so it was a shock to many scientists when subsequent observations confirmed the initial finding that the universe is indeed speeding up.

But if gravity is applying the brakes to slow down the universe down, what could be speeding it up? This question is the focus of the cover story in the February 2009 issue of Sky & Telescope. Science writer Richard Panek, author of several books about astronomy and science, tackles this question by addressing the impact of this discovery on science, and the variety of means that astronomers are using to solve this great mystery, the mystery of dark energy.

Richard, who is the author of a forthcoming book on dark matter and dark energy, discusses with S&T editor Robert Naeye how dark energy was discovered, why it’s such a big surprise to scientists, and the possibility of whether astronomers are being tricked into thinking that dark energy is real when it really isn’t.