Penumbral shading on the lunar disk. 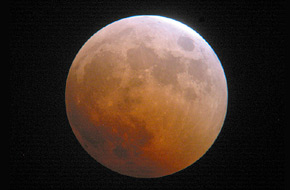 Taking a break from Game 4 of the World Series on October 27, 2004, Sky & Telescope editor in chief Rick Fienberg stepped into his Boston backyard to catch a glimpse of that evening's total eclipse of the Moon.

I've always been fascinated by eclipses. An eclipse of the Moon provides a front-row seat to watch Earth's shadow overtake another celestial body. There is a bit of drama watching for that first sign of very weak shading as the Moon glides into the pale outer fringe of the Earth's shadow. The shadow cone of the Earth has two parts: the dark, inner umbra, surrounded by the lighter penumbra. The penumbra is the pale outer portion of the shadow. It can be seen as a faint shadow slowly moving across the Moon with the unaided eye. This faint shadow can generally be detected when the Moon is about 50 to 70 percent of the way into the penumbra.

In the April 2005 Sky & Telescope, senior editor Alan MacRobert issued a challenge to determine how early the penumbral shading becomes detectable during an eclipse. I wondered how early the penumbral shadow can be detected using a digital camera and image processing software. The encroachment of the penumbral shadow during a lunar eclipse is very subtle. Digital images can capture these slight variations, and enhancement by digital processing will allow us to see them. The partial eclipse of the Moon on October 17, 2005, provided an opportunity to explore this question.

The eclipse began with the Moon entering the penumbra (first contact) at 2:51 a.m. Pacific Daylight Time (9:51 UT) on the morning of October 17th. Even at mid-eclipse, only 7% of the Moon's diameter was covered by the Earth's umbra (S&T: October 2005, page 66). I took an exposure of the Moon each minute starting at 5 minutes before first contact all the way up to mid-eclipse. The images were taken with an 85mm Stellarvue APO refractor and a Canon 300D digital SLR camera at prime focus. The Moon was tracked during the eclipse using a Losmandy GM-8 mount with the lunar tracking rate selected. Each exposure was 1/1000 of a second at an ISO setting of 200. Since the Canon 300D did not come with mirror lock-up, I updated the firmware of the camera to enable this feature. Mirror lock-up allows the camera to flip the mirror up well in advance of the exposure, and lets the vibration caused by the mirror movement die away. I experimented with different settings before the eclipse so as not to overexpose the brightest regions on the Moon. Overexposure would result in losing valuable information on image brightness. All images were saved in the camera's RAW format.

During the eclipse, I noted that the penumbra first became readily apparent to the unaided eye at about 3:44 a.m. PDT. This was 53 minutes after first contact. At this point, 64% of the Moon's diameter was immersed in the Earth's penumbral shadow. 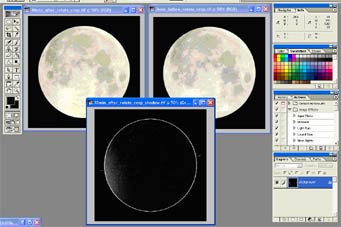 To do this, I loaded an image taken before first contact into Photoshop as a new layer and named this layer "before." I then opened an image taken after 1st contact as a new layer and named that image as "top layer." Once I had loaded both layers into Photoshop, I highlighted the top layer in the layers palette and then selected all the pixels in that layer by clicking on Select > All. I dragged the top image into the "before" image using the Move tool (while holding down the Shift key to help the files line up) so both images were now in a single document. With both images now in one document, I needed to fine tune their alignment and do the subtraction. With the top layer active, I changed the Blend Mode pop-up menu at the top of the Layers palette to Difference mode and looked at the results. In Difference mode, areas that appeared as solid black indicated where the active layer (top layer) and underlying layers were identical. Areas that appeared as shades of gray and color indicated areas that are different from what's below. I used the move tool to reposition the top layer until the image became as dark as possible (I used the arrow keys to nudge the image in the X-Y coordinates one pixel at a time). The top image was also repositioned by rotating the image in one-degree increments both clockwise and counterclockwise until the image became as dark as possible. In most cases, rotation of the top image resulted in no perceptible improvements in the amount of overlap between the two images. 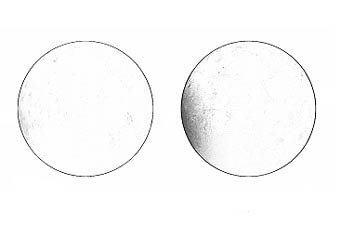 These selected "difference" images from Adobe Photoshop show the gradual advancement of the penumbra across the face of the Moon. Each image is labeled with the time elapsed after first contact, the point at which the Moon first touched the Earth's penumbra. The first hint of penumbral shading occurred at 19 minutes after first contact. Click on image for the full view.

After I had aligned the two images, I clicked on Layer > Flatten to save the difference layer. I then saved this image as a separate file in TIFF format. The saved image represented the difference between the "before" image and the subsequent image taken after first contact. This procedure was repeated for all images taken at 1-minute intervals afterward. In order to increase the contrast with the penumbra and the rest of the lunar image, contrast was increased in Photoshop by +40 for each image. I then converted the difference images to 8-bit color and then to grayscale. Finally, each image was inverted to show shadows as dark rather than lighted areas. In an inverted image, areas where there was no change in brightness appear as white.

Results from the difference images shows that the first visible penumbral shading occurred at 19 minutes after first contact . At this point, 24% of the Moon's diameter was immersed in the Earth's penumbral shadow. The value of 24% was derived by using the eclipse diagrams on the NASA website site authored by eclipse expert Fred Espenak. Using diagrams on this website, I placed an image of the Moon at the calculated position for 19 minutes after first contact and measured the fraction of the Moon's diameter covered by the penumbra at that point. 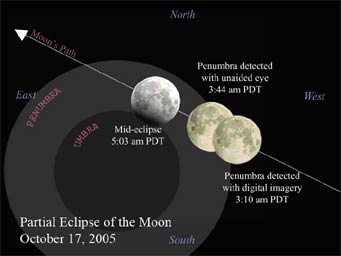 The Moon's path (from lower right to upper left) through the edge of Earth's shadow (adapted from S&T: October 2005, page 66). The Moon's position is shown at three stages: 1) when the penumbra was first detected using digital imagery; 2) when the penumbra was first detected with the unaided eye; and 3) an image at mid-eclipse. Click on image for a larger view.

My first sighting of the penumbra with the unaided eye was not until 53 minutes after first contact-a full 34 minutes after the penumbral shading was detected using digital imagery. At this point, 64% of the Moon's diameter was immersed in Earth's penumbral shadow. Determining when you believe you see this darkening with the unaided eye is highly subjective and can vary greatly depending upon whether observations are made by telescope, binoculars or unaided eye. Further, visibility of the penumbra can vary at each eclipse because of conditions in Earth's atmosphere. I recorded the unaided eye sighting only after I was positive of the shading.