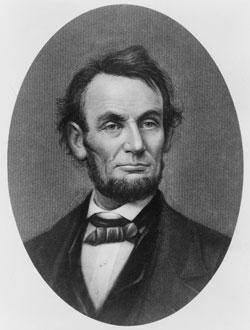 Abraham Lincoln (1809–65) may not fully qualify as an amateur astronomer, but some celestial events during his life were noteworthy.

US Library of Congress

In this, the year celebrating the 200th birthday of Abraham Lincoln, Donald W. Olson and Laurie E. Jasinski summarize several celestial connections to the United States's 16th president in the March 2009 Sky & Telescope. The article notes the famed "alamanc trial" of 1857, the Leonid meteor storm of 1833, a daytime sighting of Venus after his second inaugural address in 1865, and a visit to the U.S. Naval Observatory.

For more detailed accounts of two of these happenings, click to download PDF files of "Lincoln and the Almanac Trial" from the August 1990 S&T and "Abe Lincoln and the Leonids" from the November 1999 issue.

But there was one more cosmic tidbit that didn't fit into Olson and Jasinski's article. Besides witnessing the Leonid meteor storm, Lincoln had another celestial observation to make modern skygazers envious.

Lincoln and Horace White, a reporter for the Chicago Press & Tribune, observed brilliant Donati's Comet on the evening of September 14, 1858, the day before one of the legendary debates with incumbent U.S. Senator Stephen Douglas, which White was covering for the newspaper.

According to White, "Mr. Lincoln greatly admired this strange visitor, and he and I sat for an hour or more in front of the hotel looking at it." (Source: Abraham Lincoln: The True Story of a Great Life, by William H. Herndon and Jesse W. Weik, 1895.)