Chaos in the Early Solar System 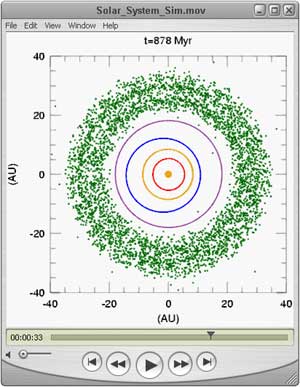 Click on this image to display a 7-megabyte QuickTime movie illustrating how trillions of planetesimals in the early solar system changed the orbits of the outer planets. If you don't already have QuickTime on your computer, you can download a free copy from Apple.

R. Gomes and Others

In the September 2007 issue of Sky & Telescope (page 22), Mark Littmann describes the fascinating finding of how celestial dynamicists collaborated to discover that an intense game of interplanetary billiards led to our current arrangement of planets and smaller bodies.

Their findings are best illustrated in the 7-megabyte QuickTime animation here. The movie begins with the giant planets (Jupiter through Neptune) in circular orbits surrounded by an even belt of icy objects beyond. As time moves forward, the progression seems slow, even though millions of years (Myr) are passing. If you look closely, you'll notice gaps appearing in the proto-Kuiper Belt, much like the Kirkwood gaps in the main asteroid belt.

As the eons fly by, the orbits of the three outer planets expand outward, and the belt of planetesimals spread out a bit. But all hell breaks loose just after the chronometer reaches 878 million years. It's then, as Littmann explains in the article, that Saturn and Jupiter reach a 2:1 orbital resonance. The gravitational tugs from Jupiter accumulate to greatly alter Saturn's orbit. With Saturn on the move, this in turn shifts the orbits of Uranus and Neptune, which plunge into the planetesimal reservoir, scattering bodies like the police arriving at a high-school house party.

We slowed the animation during these key frames. Otherwise the transformation would be over in the blink of an eye. Afterward, the planets settle down into the orbits we have today.