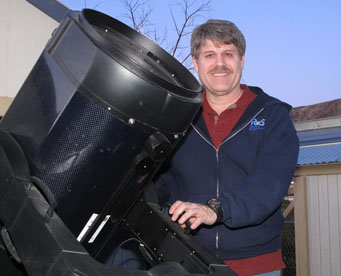 Over the years, amateur astronomers have discovered tens of thousands of asteroids. But in recent years, amateur involvement in asteroid studies has shifted gears. Robert Stephens, an amateur astronomer based near Los Angeles, exemplifies this new era of research. Instead of actively searching for new asteroids, Bob makes brightness measurements of asteroids to find out their rotation periods, and whether they have binary companions. Robert has contributed to numerous scientific papers, and for his major contributions to our knowledge of asteroids, the American Astronomical Society awarded him its prestigious Chambliss Amateur Achievement Award for 2010.

Bob authored the article “Asteroid Maven” for the October 2010 issue. To learn more about Bob’s asteroid work, and how you can get involved, listen to this podcast interview with S&T editor in chief Robert Naeye. Besides talking about his asteroid observations, Bob Stephens also discusses one of his other favorite astronomical pastimes: eclipse chasing.