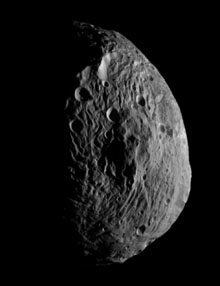 Many asteroids have been visited by spacecraft since the Galileo probe flew by Gaspra in 1991 en route to Jupiter. These spacecraft encounters have yielded a treasure trove of detailed images and data.

To study an asteroid's surface completely and in detail, it's necessary to orbit the asteroid rather than just photograph it in passing. That was first done by the NEAR Shoemaker spacecraft when it entered orbit around asteroid Eros in 2000 (see SkyWatch 2012, page 25). NEAR Shoemaker subsequently landed on Eros in 2001.

Click here for a movie of asteroid Eros as seen by NEAR Shoemaker.

The most amazing pictures by far have come from the Dawn spacecraft, which is currently orbiting Vesta, the second-largest asteroid in the main belt (between Mars and Jupiter). Click here to browse the Dawn mission gallery for still images and movies.

Click here to find other videos and images for SkyWatch 2012.