With the October 2007 issue, Sky & Telescope introduces a new format. The design changes you'll see, along with some adjustments to our monthly mix of articles, are intended to make the magazine more attractive, enjoyable, useful, and, frankly, relevant to 21st-century astronomy enthusiasts at all levels of interest and expertise. I explain these improvements in my editorial on page 8 of the October issue. Here's a little more background. 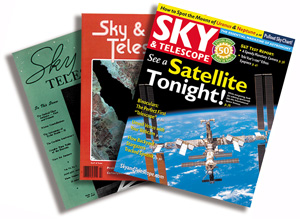 Founded in 1941, Sky & Telescope has undergone several changes in format and design over the decades. The latest debuts with the October 2007 issue (on the right).

The first thing you'll notice when you see the magazine is that we've gone back to the stapled binding we used from our first issue in 1941 through mid-1997. This switch and minor reductions in the magazine's size offer two benefits: they save money, and they reduce paper waste.

We've completely revamped our News Notes section. As a monthly magazine, S&T is hardly a source of late-breaking news. But this website, SkyandTelescope.com, is such a source, and you can now count on finding all major astronomy stories here — fast. Summaries of key developments will subsequently appear in the magazine.

Where the Web often falls short but the magazine has no equal is in providing "big picture" articles whose detailed explanations and thorough background help the whole framework of modern astronomy fit together and make sense. In S&T you'll now find more pages devoted to such articles.

All of this is intended to make the magazine more reader-friendly, not only for longtime hobbyists, but also for newcomers to backyard astronomy — the future of our hobby. The changes are also intended to acknowledge that you seek astronomy information from a variety of sources, both print and electronic. Accordingly, when we say, "Sky & Telescope," we mean Sky & Telescope the magazine and SkyandTelescope.com the website. Both together are vastly more useful and effective than either alone.

As always, I'm eager to get your feedback — not just about the changes we've made to S&T, but about anything in the magazine or on our website. You can leave a comment below or send e-mail to me directly. Because I get so much correspondence, I likely won't be able to respond personally, but you can be sure I'll read every word.

Thanks, and clear skies!

I wasn't displeased with the 'old' magazine, but the new format is much better...a revival of the magazine from the 60s and 70s.

The new format appears to mark a shift away from the sensationalistic headlines and covers of the past. I hope the trend continues. The return of ATM articles is sure to win support among us that build our own equipment. I understand that may be a tough sell from the magazine's view because when I buy some wood or aluminum or bearings to build a scope I'm not using your advertisers. But (to me) ATM is at the heart of amateur astronomy. Thanks for supporting that view.

The new format is much better. Keep up the improvements.

I am totally against the new format. The previous method of binding was much better as far as legibility and "storability" on book shelf and durability. My glued S&T's never fall apart regardless of how much I abuse them. Every other stapled mag I subscribe to often lose their cover and middle pages. This will for sure be a problem with S&T. I do think the quality of the content is great, no complaints there, but I am really disappointed about the stapled binding and the more newspaper-like paper. American Scientist also uses a nice glued binding and glossy paper and just sent out a survey about changing the mag to avoid subscription increases. I implored them to raise the cost a bit if it would avoid cheapening the quality of what I consider to be the best general science magazine on the market. I feel the same about S&T.Please give us back a binding with a spine and I will deal with the other changes. Howard