The Planets, by Gustav Holst 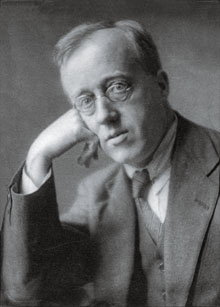 The Planets, by Gustav Holst, is probably the most famous astronomy-themed piece of classical music. In the January 2011 issue of Sky & Telescope, James Reid, an expert in music and astronomy, writes about the origin, significance, and structure of this piece.

If you're not familiar with The Planets, a number of renditions are available on YouTube. Here are a few, with comments by the author:

Adrian Boult / BBC Symphony Orchester (1945): Mars (also Jupiter posted, but seemingly no other movements)
(I can find only Boult’s Vienna Philharmonic recording from 1960 complete in YouTube)

For more information on the composer, see the website of The Gustav Holst Birthplace Museum.

Some of Reid's original material on The Planets had to be cut from the January 2011 issue for reasons of space. Click here to download a 160-Kb PDF file of James Reid's original, unabridged article on Holst's The Planets.