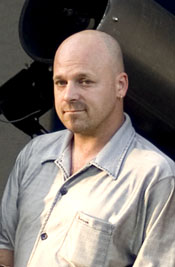 Sean Walker joined the staff of Sky & Telescope in 2000 as the Ad Production Coordinator. A graduate of Massachusetts College of Art, Sean brought extensive experience with digital and photographic prepress techniques, as well as several years of observing and astrophotography.

In his free time, Sean spent countless hours learning computer image processing techniques, as well as perfecting a few of his own. This attracted the attention of the editorial staff, and a few years later moved over to assistant editor, specializing in astrophotography and new-product coverage.

Rather than concentrating on one imaging discipline, Sean pursues a multitude of imaging projects, from deep exposures of faint galaxies, to capturing high-resolution records of the Sun, Moon, and planets with an ever-changing arsenal of cameras and telescopes. A self-described "gear head," he is constantly testing out or trading astronomy equipment.

Click here to watch a video interview with Sean Walker.

Click here for more information on the Sky & Telescope staff.