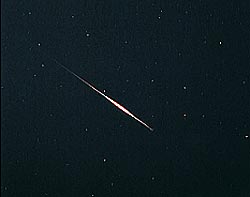 A 30-second exposure makes an Iridium-satellite flare look like a meteor. They don't really look that way.

Have you ever seen and Iridium flare? If not, you need to read our article and make a point to catch one. Good ones shine dozens of times brighter than Venus. It’s great fun to know exactly when and where one will appear in the sky and then to point it out to a bunch of people who have no idea what’s coming.

A fresh aspect of watching Iridium flares can be seen on the aforelinked article. Go ahead and click it; it will open in a new window or tab. The second illustration is from Tom Bisque, one of the innumerable Bisque Brothers of Software Bisque (there are five or a dozen of them, I don’t remember — I think they build more as they need them), makers of fine astronomical software and equipment. Just last week Tom posted his success of capturing a movie of an Iridium flare. He used one of his company’s drool-worthy Paramount robotic mounts to track one of the satellites that was predicted to brighten to about magnitude –3½. He captured the result on video and converted it into several versions suitable for watching on the Web.

I've seen plenty of photographs of flares, but they always look more like meteors than a moving satellite and thus failing to capture what they truly look like. This is the first movie of one I’ve watched, and it’s quite cool. Check out the movie, and read about how Tom did it.