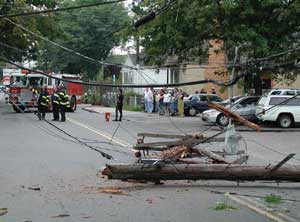 Ah, the memories of Bay State Road. Here's an afternoon in August 2001 that we didn't get much work done. (A truck snagged a low wire and pulled the pole down.) Who'd have thought that we'd have a use for this photo? Sure glad we saved it!

Moving day approaches! After a whole lotta years in the same place, the offices of Sky Publishing are moving this weekend. We're not moving far, just to the other side of an adjacent park. We'll be closer to decent Mexican and Italian restaurants and my commute will be 2 minutes faster by car (and about 8 minutes faster walking — which I might have to do more often depending on the parking situation).

As a consequence of moving, our offices will be closed on Friday, October 27th. This also means that our phones won't be working and we won't be replying to e-mail until Monday. You can still send us e-mail, however; we'll read it next week. On the upside, our SkyandTelescope.com website will continue to operate and as well as our Shop at Sky store.

At least everyone will be under one roof! If you didn't know, the offices at Bay State Road have been in three separate buildings (former residential houses), two on one side of the street and one on the other. (Here's my car.) The situation was quaint, but rather annoying during inclement weather. It will be very nice to have everyone close by. I'll be curious to see how often I hear cell phones ringing, however.

Unfortunately, we're going into a place with a little less room. As you can imagine, because we've been here so long, stuff has accumulated. Years of journals and background material for articles have filled shelves and file cabinets. As the pack-rat mentality goes: you don't want to throw something away because you never know when you might need it. Editors had to make their own choices about what to keep and what to dump. Whatever you keep has to fit in your new office. Consequently, welcome to the Big Purge. Schools have trucked off journals. Local amateur astronomers and professionals from the neighboring Harvard-Smithsonian Center for Astrophysics have come by and picked through unwanted books and posters.

Despite working here for 20 years, I didn't have too much stuff to throw away, or to move. I've kept things spartan. I did get rid of some 3½-inch and even 5¼-inch diskettes containing rather old software. At the back of my desk drawer I found the mashed pennies that were placed on the railroad tracks near the office. People are discovering all sorts of interesting things. No one turned up Jimmy Hoffa (yet), but Dennis di Cicco proudly revealed a photograph of 1970's Comet Bennett that he had sent into S&T as a teenager, along with the rejection letter from Leif Robinson. (Actually, the letter was quite cordial, just noting that it wasn't used in the magazine.)

All of this is going on while we're still trying to put out magazines and books. The January 2007 issue of S&T heads to the printer this week. Then there's the next issue of Night Sky — which I really should get back to....