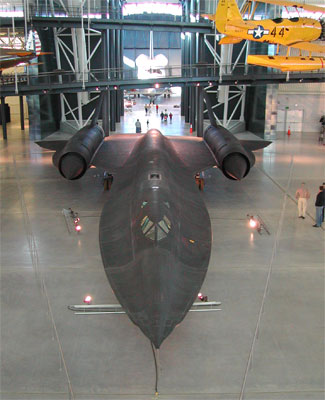 From my umpteenth visit to the Smithsonian in April 2004. In this case, I'm at the National Air and Space Museum's Steven F. Udvar-Hazy Center in Virginia. I'm standing above an SR-71 aircraft and the Space Shuttle Enterprise can be seen in the background.

Growing up in Maryland outside Washington DC, I spent quite a bit of time at the Smithsonian Institution. I couldn't even estimate the total number of times I've visited a Smithsonian facility. Besides the museums along the Mall in DC, there's the National Zoo and the Smithsonian Astrophysical Observatory, part of which is just down the street from us. On the 10th anniversary of the Apollo 11 landing, I spent the whole day (15+ hours) at the National Air and Space Museum. Throughout the years, I went to lectures, attended an all-day astronomy seminar for students, had a friend who worked at the "insect zoo," had several show-the-out-of-town-girl-around dates in college, and enjoyed many other interesting times.

So, yeah, I like the Smithsonian a lot. I have a special pet peeve for when someone misidentifies it as the Smithsonian "Institute." I even recall writing a report about founder James Smithson for school (7th grade, perhaps?).

Over the years there have been tiffs over museum exhibits, but that comes with the territory. What shouldn't be happening is the gross mishandling of funds.

It's both sad and angering to read about how Smithsonian Secretary Lawrence M. Small apparently used his position to take financial liberties with institution monies, which largely come from Congress — that is, you and me. The pervasiveness of tightening belts has led to reductions around the Smithsonian. But instead of cutting back himself, Small was using tens of thousands of dollars for dubious needs. The New York Times and Washington Post have already published articles, but a blitz of media attention will likely happen over the next few days.

I don't know what will come of it all. But I hope that unlike other recent instances of when people claim to "take responsibility" for mismanagement (Example 1, Example 2, Example 3), they will actually suffer some consequences instead of just shrugging it off as if "responsibility" has no meaning. We can start by getting our money back.