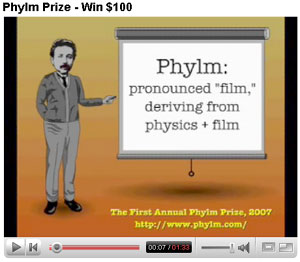 The First Annual Phylm Prize will be awarded in May. Enter now for your chance to win $100 — and perhaps 15 minutes of fame.

A friend told me earlier in the week that she was called out for using the most Internet bandwidth of anyone in her office. She says all she was doing was listening to streaming radio on her computer, but I'm sure the Internet police thought she was watching YouTube videos all day long.

If that's one of your primary activities with your computer, why not join in on the YouTube fun by contributing your own video? You could win some money.

On Wednesday night, David Colarusso, a high school physics and astronomy teacher on exchange from Edinburgh, Scotland, and now in Lexington, MA, posted a message on sci.astro.amateur about a competition to make a "phylm." As he explains:

"Phylm, pronounced 'film,' is a portmanteau of 'physics' and 'film,' and for the past four years my students have produced short phylms. Basically, they take Hollywood or home movies and analyze their presentation of physics. Sometimes they want to know if the bus from Speed could have made the jump. Sometimes they're curious about forces they themselves have experienced. What makes the projects unique, is that they draw on top of and narrate over the original clips — producing a cross between a DVD commentary and VH1's Pop Up Video."

He's opened the door Internet-wide, and invites anyone to contribute via YouTube. Instead of extra credit, however, you can win $100 of David's money. And undoubtedly profound fame! The entry deadline is May 1st, so get cracking.

Now's your chance to be come your own Bad Astronomer of sorts, if you want to take on the bad physics in movies. The Sci-Fi Channel had another asteroid-threatens Earth movie last night, which I recorded, but haven't watched yet. I'm sure it's awful, but maybe the effects are interesting. I'm also interested because it features an asteroid hitting the Moon, which I wish I could see for real.

(Speaking of TV, try to catch a repeat of this week's episode of Nova over the weekend. It was about the cuttlefish, of all things, but it was fascinating.)