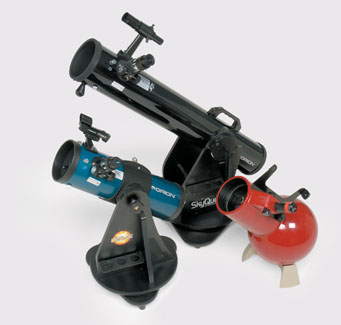 In the December 2005 issue of Sky & Telescope, Gary Seronik reviewed a collection of the best starter telescopes costing less than $200. He selected five scopes that stood well above the pack in terms of performance and usability. Many of the telescopes that he liked less are no longer being sold, but his five winners are still going strong — though some of them now cost more than $200. It's quite likely that if we were to conduct the same survey today, we would still pick the same 5 as our top scopes.

To make a long story short, here are the best telescopes under $200 reviewed by Gary Seronik in 2005. Be sure to check with the manufacturer regarding price and other types of telescopes that may work for you.

These telescopes are listed in order, with the best first. But there's more to a scope than a comparative ranking. Each of these has its own strengths and weaknesses, and each is the perfect scope for certain purposes. So by all means, read Gary's complete review and make your own decision on the best starter telescope for you and your needs.

Also worthy of mention are the Celestron FirstScope, the Orion FunScope, and the Galileoscope.

The Celestron FirstScope lists for $499.95, but often sells at deep discounts in brick-and-mortar stores. The Orion FunScope, available primarily by mail order, is the same scope at the same list price. But it comes with better eyepieces and a red-dot finder, and is unlikely to be found at a significant discount. Both scopes are limited by the quality of their mirrors, but they have stable mounts and good focusers — two critical areas where most low-cost scopes fall far short.

The Galileoscope comes without a mount — one of the most important components of any serious telescopes — and it also retails for $49.95. So if you want an off-the-shelf telescope, you would probably do better with the offerings from Celestron and Orion. But the Galileoscope is a superb educational kit, allowing you to see the inner workings of a telescope as you assemble it from scratch — with the bonus of a serious, astro-ready telescope when you've finished the assembly.

If you're new to astronomy, take a look at the articles in our Tools for Stargazing section — especially Choosing Your First Telescope.