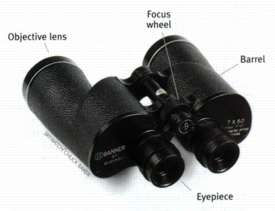 Binoculars have long held a prominent place in amateur astronomy, with many observers having them as part of their observing kit. And why not? Binoculars are simply two small telescopes mounted side by side. The best glasses for general astronomy are 7x50s or 10x50s. However, any size can work as an astronomical instrument. What size you choose depends largely on your budget and needs. As with telescopes, there's a lot of information to consider before you purchase binoculars.

Entering the binocular market for the first time, you may find yourself adrift in a sea of special terms and acronyms. The most commonly encountered ones are listed below. Understanding them — and knowing whether they're applicable to astronomy — is essential to making a good buying decision.

Two basic terms are magnification and aperture. You often see them as numbers, such as 7x50 or 8x30. The first number is the magnification, or "power," telling how many times an object is magnified or how much larger it will appear. The second number is the aperture, the diameter of each of the front (or "objective") lenses in millimeters. Therefore, 8x30 binoculars (spoken as "8 by 30") will make objects appear eight times larger than with the unaided eye and have objective lenses 30 mm in diameter. The larger the objective lenses, the greater the light grasp, and the brighter the object will appear at a given magnification.

In astronomy, most targets glow only dimly in the darkest depths of night, so a large aperture becomes much more important than it is for daytime use. Therefore 7x50 binoculars will show many more stars and deep-sky objects than 7x35s because, though both units magnify everything to the same apparent size, the 7x50s collect about twice as much light, thereby making stars appear twice as bright.
[back to terms]

Field of view is the area of land or sky the glasses present to your eyes. Makers of binoculars often state this as width in feet at 1,000 yards. For example, engraved on 7x50 binoculars might be the phrase "372 feet at 1,000 yards." This is the binocular's linear field of view. But astronomers are used to fields of view being expressed in degrees. The conversion is easy — divide the linear field by 52.4. So the 7x50s mentioned above have an angular field of view of slightly more than 7°. Remember that the higher the power of your binoculars, the smaller the field of view will be.
[back to terms]

The exit pupil is the disk of light you see apparently floating in the eyepiece when the instrument is held a foot or so from your eyes. This little disk must be equal to or smaller than the pupil of your eye if you want the full light-collecting benefit of the instrument's aperture. You can measure the exit pupil directly with a millimeter ruler or just divide the aperture by the magnification. So both 7x35 and 10x50 binoculars have exit pupils 5 mm wide.

Young people's eyes have pupils that open to about 7 mm in the dark. So a 7-mm exit pupil is generally taken to be the largest you can use if you want all the light collected by the binoculars to enter your eye. But it's important to remember that our eyes dilate less as we age, so a 5-mm exit pupil is a better guideline for middle-aged and older people.
[back to terms]

Eye relief indicates how far the binoculars can be held from your eyes and still allow you to see the full field of view. Long eye relief is especially useful for people who must wear glasses while observing in order to correct for astigmatism. If you're merely nearsighted or farsighted, you can take off your glasses and refocus the binoculars to compensate.
[back to terms]

When you're looking for fine astronomical binoculars, mechanical and optical quality are both crucial.

Mechanical styling. Most binocular bodies come in one of three styles: the roof-prism, or "H," style; the Zeiss, or "German," style; or the Bausch & Lomb, or "American," style. The latter two are Porro-prism designs and often look similar, but they differ quite a bit in concept and structural integrity. The Zeiss-style binocular is characterized on the outside by its two-piece body. The housing for the objective screws into the main body, or prism housing, which is divided in two, with a Porro prism in each half held in place by a steel spring clip. This construction leaves the binoculars more susceptible to being knocked out of alignment than the American-style, one-piece body in which the prisms are mounted together on a "shelf."
[back to list]

The two basic designs for binoculars are the traditional, bulgy Porro-prism design left and the lightweight, sleek roof-prism. Size for size the latter is usually more expensive and not as good for astronomical purposes.

Center focus vs. individual focus. Most people opt for a center-focus model, in which turning a small wheel between the eyepieces focuses both of them at once — but only after correcting for any difference in nearsightedness or farsightedness between your eyes. This is done by first focusing for the left eye (using the center wheel) and then bringing the right-eye view into focus by adjusting the right eyepiece focuser. This isn't the best choice for astronomers. After all, celestial objects don't change their distance, and so frequent refocusing isn't required. Individually focused eyepieces are simpler, more rugged, and less prone to moisture infiltration. Best of all, they won't tilt back and forth when you turn the focus in and out or rock side to side when you press unequally against the eyepieces.
[back to list]

Antireflection coatings. Few features are touted more in binocular ads than the quality of antireflection optical coatings. In the best binoculars all air-to-glass surfaces are multicoated, which not only improves light transmission but also minimizes internal reflections and ghosting. Modern multicoatings are better than single-layer magnesium fluoride (MgF) coatings, but a lot depends on how well any coating is applied. On many inexpensive instruments, internal surfaces are left uncoated. "Fully coated" ought to mean all air-to-glass surfaces are coated, but in practice it can mean almost anything. As for comparing multicoatings by two reputable manufacturers, you might as well try to split hairs with an ax — there's just not much difference.

One crude in-store test of antireflective coatings is to place your hand over the eyepiece and look down at the objective lens. In glasses with simple magnesium fluoride on the objectives, you'll probably see your face quite well. In a multicoated lens you'll see a noticeably dimmer reflection. And contrary to urban legend, you can't reliably judge the quality of coatings by their color. However, a totally white reflection may indicate an optical surface that is not coated at all.

For the last few years, some companies have sold binoculars with so-called "ruby" coatings that increase the contrast between brown and green objects. This feature is fine for nature lovers trying to distinguish a deer or other brown-toned animal against the green background of foliage, but skygazers don't find many brown bears free-floating in space! In addition, if you look at the objectives you'll see your face very well — much better than with multicoated or MgF-coated lenses. This reflection means you're seeing light that should be going the other way — through the instrument to your eyes. With the coating reflecting so much light, the binocular's light grasp is significantly reduced. Thus, users of ruby-coated binoculars are trading image brightness for a slight improvement in contrast — a tradeoff that amateur astronomers should avoid.
[back to list]

Baffling. The presence of shielding against stray light and internal reflections mustn't be taken for granted. Aim the binoculars at a bright surface or scene. The field of view should be surrounded by a black or very dark background and not be affected by shiny reflections from internal parts or the improper placement of field stops. Anything less will result in a loss of contrast.
[back to list]

Glass types. Another binocular feature often oversold is the type of glass used in the prisms. For most designs, prisms made of barium light crown glass (Bak4) are preferred over the industry-standard borosilicate crown glass (Bk7). Bak4 has a higher refractive index, which allows the exit pupil to be fully illuminated. The less-expensive Bk7 prisms put squarish, gray edges on the exit pupils. In practice, most people will not notice the slight loss of image brightness from Bk7 prisms, particularly if the binoculars have a large exit pupil.
[back to list]

Collimation. Since binoculars may be thought of as a pair of telescopes mounted side by side, an error in collimation (alignment of the two telescopes) can significantly reduce the performance of even the best binoculars. In "true" collimation, the two barrels remain aligned with each other no matter what the interpupillary distance — the gap between the pupils of your eyes. When binoculars are aligned for only one particular interpupillary distance, they're not really collimated. Inexperienced technicians often use this "conditional alignment" when aligning or realigning binoculars. As binoculars age and get bumped around, their collimation will gradually drift. Insisting on good-quality mechanics when you buy your binoculars ensures that they will last longer before collimation errors become a problem.
[back to list]

Waterproofing. The most common reason binoculars need repair, aside from getting knocked out of collimation, is moisture stains or fungus on the prisms and lenses. Repeated changes in temperature and humidity allow condensation to damage internal parts and cloud optical surfaces. (Dunking binoculars in the lake doesn't help, either.) To "just clean" binoculars actually means an expensive disassembly, reassembly, and complete recollimation. By comparison, a premium, waterproof, dry-nitrogen-filled instrument begins to look economical.
[back to list] 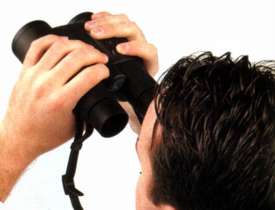 Pressing a button on the top of image-stabilized binoculars activates the electro-mechanical stabilization system. Even small hands can conveniently reach the button with the index finger.

Holding 7-power binoculars steady is not a chore for most people. But use a higher power, or point your binoculars skyward, and body tremors cause the image to bounce and shake. This motion compromises your view of the night sky and robs the image of fine detail. The traditional (and inexpensive) solution to the jitters is to attach the binoculars to a tripod. Most binoculars come with a threaded mounting hole. An L-shaped adapter screws into this hole and onto a camera tripod. Also available are binocular mounts specifically designed for astronomical use.

A different approach to the problem came in 1980 when Fujinon introduced the Stabiscope — a gyro-stabilized binocular. So good is this unit that a 14-power image can be stabilized enough for use from a helicopter or fast-moving boat or automobile. But its $5,000 price tag kept the unit from catching on with casual observers.

Fortunately, image stabilization (IS) for astronomers has arrived. Canon is offering a whole family of lightweight, handheld IS binoculars, and other companies (Fujinon included) are entering the fray. Pressing a button on the top of the binocular housing activates the image-stabilization system. But this new technology comes with a price — most IS binoculars are several times more expensive than their nonstabilized equivalents.

While most people don't really need help holding low-power binoculars steady, the higher-power units are real astronomical workhorses. Stabilization allows you to view objects fainter than you might think possible, and it helps reveal far more detail than would be visible in equivalent non-IS binoculars.

Binoculars offer novice stargazers an intuitive way to explore the sky. Veterans often regard binocular observing as an activity distinct from telescopic viewing. Regardless of your experience, quality binoculars belong in every observer's kit.