A Fall to Earth, One Year Later

Someday we Earthlings may grow used to the idea that small asteroids occasionally slam colorfully but harmlessly into our planet's shielding atmosphere.

For now, however, there's only one — designated 2008 TC3 — and today marks the first anniversary of its discovery. No bigger than an SUV, this interplanetary interloper revealed itself in images from the Catalina Sky Survey's telescope in Arizona only 19 hours before it exploded over northern Sudan in the predawn darkness of October 7th. Never before had astronomers identified, ahead of time, something about to strike Earth. 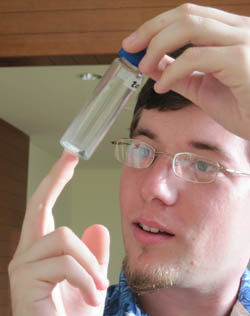 A small sample of the meteorite Almahata Sitta draws an admiring gaze from a planetary scientist.

That should have been the end of 2008 TC3's story — but it wasn't. The big rock self-destructed spectacularly at an altitude of 20 miles (37 km) and, against all odds, dropped fragments on the rubbly Nubian desert. A search effort, led by Peter Jenniskens (SETI Institute) and physicist Mauwia Shaddad (University of Khartoum), recovered dozens of black-as-charcoal lumps along an extended west-to-east path (called a strewnfield). These fragments are collectively named Almahatta Sitta, which is Arabic for "Station 6", the Sudanese rail stop nearest the fall site.

Since then, meteorite specialists around the world have tried to understand just what fell out of the sky a year ago, and yesterday a gathering of planetary specialists in Puerto Rico heard the latest assessments of what one attendee called "a sample-return mission for the cost of a plane ticket to Sudan."

The collected stones are ureilites, dark carbon-enriched rock that once was at least partly molten. But even among ureilites, which comprise only 1% of all meteorite falls, Almahata Sitta is both weird and unique. It's a fragment of an asteroid initially some 120 miles (200 km) across that melted, then got smashed apart, then reassembled into a hodgepodge of loosely welded fragments. "You could crush it in your fist," observes Michael Zolensky, who analyzed pieces of Almahata Sitta at NASA's Johnson Space Center.

Jason Herrin, his NASA-JSC colleague, reports that that pockets of carbon within the meteorites must have been cooked to at least 2100°F (1150&#176C), before cooling rapidly. Another assessment by Andrew Steele (Carnegie Institution of Washington) found microscopic diamonds embedded within some of the carbon. Yet the fragile stones contain far less organic material than do other carbonaceous meteorites that haven't been heated so much.

A shape model of the ill-fated asteroid 2008 TC3, derived from a composite light curve amassed by astronomers at the Clay Center Observatory and other observers. A longer animation is here; a high-definition version can be downloaded here (requires QuickTime) or as an MP4 file here.

Meanwhile, three Czech researchers led by Peter Scheirich have deduced both the shape of 2008 TC3 ("It looked like a loaf of bread with a flat side," quips Jenniskens) and how it was tumbling just before striking Earth. Although seemingly chaotic, the asteroid's motion resulted from twirling around two different spin axes every 99 and 97 seconds.

Scheirich showed a mesmerizing animation of how the asteroid would have looked up close as it tumbled toward its demise. His analysis relied heavily — frankly, it wouldn't have been possible — without a 2-hour-long sequence of images taken every 4 seconds by Marek Kozubal and Ron Dantowitz of the Clay Center Observatory in Brookline, Massachusetts. As they tracked 2008 TC3 in its final hours of existence, the asteroid's brightness flared and dimmed by a full magnitude as different its faces were facing Earth.

Jenniskens and Shaddad plan to revisit the scene of the crash in two months, as part of a workshop about the unlucky asteroid and its lucky survivors at the University of Khartoum.