A Galaxy with the Wrong Shape

The Sloan Digital Sky Survey recently swept up a previously unseen dwarf galaxy 430,000 light-years away in Hercules. Astronomers naturally assumed that the diminutive star system was shaped like the 17 others buzzing around the Milky Way and the millions more in the realm beyond: round, or nearly so. But when researchers turned the newly commissioned Large Binocular Telescope on the Hercules dwarf, they were surprised to find the galaxy flattened and elongated. 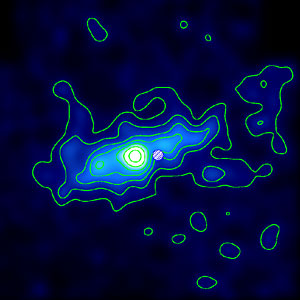 This 20-arcminute-wide map of star densities in the Hercules Dwarf Galaxy reveals that the little star system is cigar shaped rather than round like most other dwarf galaxies. The hashed circle just right of the dense nucleus marks the location of a glary foreground star.

Spiral galaxies, and some ellipticals, are flattened by rotation; most of their stars orbit in the same direction around the center. But in dwarf spheroidals bound mostly by dark matter, stars swarm more like bees around a hive. "The Hercules Dwarf Galaxy is either unlike any of the millions of dwarf galaxies studied so far," says team leader Matthew G. Coleman (Max Planck Institute for Astronomy, Heidelberg), "or else it circles our galaxy on an extremely plunging orbit."

In that latter case, the galaxy must have looped close to the Milky Way's massive nucleus in the distant past, so that our galaxy's gravitational tidal forces stretched it into a cigar shape. Astronomers already know of one satellite galaxy that suffered this fate: the Sagittarius dwarf. But it's only a tenth as distant as the Hercules system. "Whether Hercules was somehow tidally stretched in the past or if it's flat for some other as-yet-unknown reason," says Coleman, "it's an exceptional, unparalleled object." 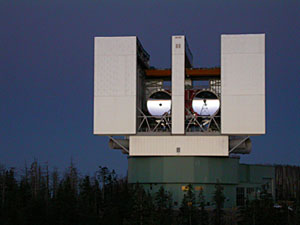 With two 8.4-meter (27½-foot) primary mirrors coaligned on a single mount, the new Large Binocular Telescope on Mount Graham in Arizona is one of the world's most powerful astronomical instruments.

The Large Binocular Telescope (LBT) is unique among today's optical giants. It sports two 8.4-meter (27½-foot) reflectors on a common mount. From its perch atop Mount Graham in southeastern Arizona, it will eventually operate as an interferometer, combining starlight from its twin eyes to operate with the light-gathering power of a single 11.8-meter telescope (based on the mirrors' total area) and the resolving power of one 22.8 meters in diameter (based on the distance between the mirrors' outer edges).

The report from Coleman's team — the first scientific paper based on LBT data — is available online from the astro-ph preprint server and will appear in Astrophysical Journal Letters. You can also read about it in an LBT Observatory press release. An illustrated article about the LBT will appear in the December 2007 issue of Sky & Telescope.