A New Chapter in the Life Story of Planets? 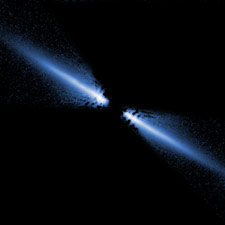 Yesterday's press conference included recently acquired Hubble Space Telescope images of a dust-laden disk surrounding the star AU Microscopii. The star is only 10 million years old, contains half the Sun's mass, and lies just 33 light-years from Earth. Its disk may include primordial dust grains that have never been bound up within planetlike bodies.

Yesterday scientists using the Spitzer Space Telescope
described what may be a missing link in the life story of solar systems like our own.

How do solar systems grow? Theorists think that a star's rocky planets (and the cores of gas giants) are built up when solid particles interact with each other and stick together. This takes place within a circumstellar disk — the swirling leftovers of the dusty gas cloud that has given birth to the star.

Later, the planet-building chunks grow large and begin to collide with one another, blasting dust grains back into orbit. This process should produce a dusty "debris disk" — and such disks indeed are seen around numerous stars. What's more, some of these disks show ripples, bumps, or "doughnut holes" that hint strongly at the presence of planets.

But until Spitzer took flight last year, no one had convincingly documented a debris disk surrounding a known planet-bearing star other than the Sun. Now, a Spitzer survey headed by Charles A. Beichman (Jet Propulsion Lab) has picked up excess infrared radiation from six Sunlike stars. The stars weren't picked at random: each of them already was known to wobble back and forth under the gravitational influence of one or two unseen planets. 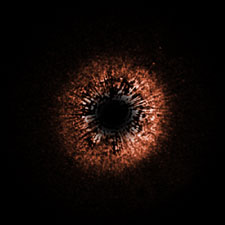 HD 107146 in Coma Berenices — a slightly older, Sunlike star 88 light-years away — sports a disk that probably contains only collisional debris. The dark central hole in each image shows where the star was blocked by Hubble's coronagraph so the disk could be seen.

The excess radiation spied by Spitzer tells us that "a large reservoir of dust" orbits each of the six stars, Beichman said during a news teleconference yesterday. The dust can't predate planet formation because the stars all are at least one billion years old, and they would have dispersed their natal cocoons within a few million years of their births. Thus it must have been liberated after being locked up in mini-planets akin to those in our solar system's Kuiper Belt.

By cementing the connection between debris disks and planets, "these observations ... close the loop," says independent expert Alycia J. Weinberger (Carnegie Institution of Washington). What's more, she adds, "the new disks discovered by Spitzer have the potential to be our Rosetta Stones." That's because future images from the James Webb Space Telescope or the Terrestrial Planet Finder may enable astronomers to prove that planets really have sculpted the stars' disks.