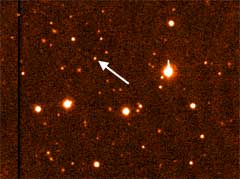 The discovery image of 2004 DW. The observations were made from Palomar Observatory with the 48-inch Oschin Telescope and the Palomar QUEST camera. Click on image for an animation.

Move over Quaoar! The outer solar system may have a new heavyweight champion. On February 19th astronomers announced what may be the largest object yet seen in the ring of icy objects beyond the orbit of Neptune known as the Kuiper Belt.

For the past 1½ years, the reigning king of the Kuiper Belt has been 50000 Quaoar, measuring about 1,250 kilometers (775 miles) across. Michael E. Brown (Caltech) and Chad A. Trujillo (now at Gemini Observatory) discovered it using the 48-inch Oschin Schmidt telescope on Palomar Mountain. The duo, along with David L. Rabinowitz (Yale University), has now found another slow-moving blip on images taken on February 17th with the new Palomar QUEST camera. Based on the object's brightness, distance, and assuming a reflectivity similar to Quaoar, the researchers believe that new body — designated 2004 DW — is about 1,600 km across. If the object reflects less than 9 percent of the sunlight that reaches it, the object could be larger, edging closer to the size of Pluto (2,300 km).

Within days of the initial announcement, 2004 DW was found on CCD images and photographs dating back to 1951. These additional positions have helped further refine its orbit, which is quite Pluto-like: revolving around the Sun at an average distance of 39.5 astronomical units and at an inclination of 20.6° to the ecliptic.

Details about 2004 DW will continue to emerge as the object is studied using other instruments. Infrared observations will help refine its size.