It's been a couple of decades since our Sun lost its status as the only star known to have planets. And now it can't even claim to be only one with a well-populated planetary system. 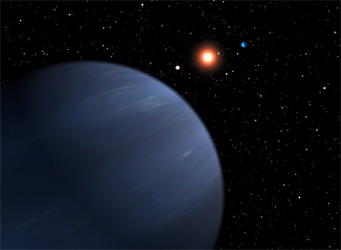 This artist's concept shows four of the five planets that orbit 55 Cancri, a star much like our own. The one in the foreground, discovered most recently, has about 45 times Earth's mass and orbits the star at an average distance of 72.5 million miles.

Today astronomers announced that the star 55 Cancri, right around the corner at 41 light-years away, has at least five planets in its retinue. Number Five is a Saturn-class world that outweighs Earth by about 45 times. It circles 55 Cancri in a 260-day-long orbit roughly the size of Venus's. Because the star is slightly fainter than our Sun, this new find (officially designated 55 Cancri f) lies within the star's "habitable zone" — at temperatures where water would exist in liquid form.

A team led by Debra Fischer (San Francisco State University) and Geoff Marcy (University of California, Berkeley) utilized measurements of the star's very slight cyclical motion toward and away from Earth to infer the planets' presence. It's taken 320 of these measurements at Lick Observatory in California over 18 years to disentangle the contributions of all five planets.

"This is the first quintuple-planet system," notes Fischer in today's press release. There's a dominant gas giant in a Jupiter-like orbit, and the other four lie closer in.

"Finding five extrasolar planets orbiting a star is only one small step," observes Marcy. "Earth-like planets are the next destination."

The article states "There's a dominant gas giant in a Jupiter-like orbit." Is it still considered accurate to refer to these as *gas* giants? Aren't the Jovian planets more liquid than anything else? Below a layer of gaseous molecular hydrogen, isn't Jupiter made up primarily of liquefied metallic hydrogen?