This is both a news story and a cautionary tale. Let's start with the news, which concerns the galaxy IC 10 in Cassiopeia and the power of new technology to address old mysteries. 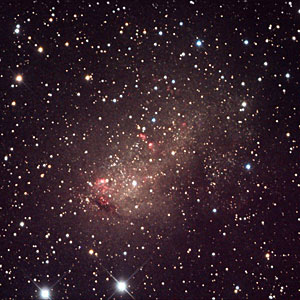 This view of the dwarf galaxy IC 10 in Cassiopeia was obtained from Kitt Peak National Observatory.

Early in the last century, astronomer Edwin P. Hubble called IC 10 "one of the most curious objects in the sky." Once thought to be a clump of nearby stars embedded in faint nebulosity, IC 10 was eventually found to be an irregular dwarf galaxy orbiting M31, the Andromeda Galaxy, the nearest large spiral to our own Milky Way.

Unlike most dwarf galaxies, IC 10 is busily forming new stars, and an inordinately high fraction of these are massive and luminous. In particular, IC 10 is chock-full of normally rare Wolf-Rayet stars. These blue giants are extremely hot and shed enormous amounts of material into space. In most galaxies, including our own, some W-R stars exhibit strong emissions from carbon (so-called WC stars) and others from nitrogen (WN stars). This is in line with widely accepted theories of star formation and evolution. Oddly, though, in IC 10 astronomers have found almost no WN stars. Is there something wrong with stellar theory, or could IC 10 be hiding its WN stars? 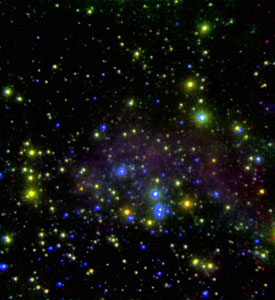 The central starburst region of the irregular dwarf galaxy IC 10, as revealed with adaptive optics at the Keck Observatory.

This is where new technology comes in. At a distance of nearly 3 million light-years, it's exceedingly difficult to pick out individual stars in IC 10 using even the largest ground-based telescopes. To hunt for hidden WN stars, a team led by William Vacca (NASA/Ames Research Center) used the Hubble Space Telescope — whose images aren't blurred by Earth's atmosphere — and one of the twin Keck telescopes atop Mauna Kea, which use adaptive optics to "detwinkle" starlight to produce Hubble-quality images. Vacca and his colleagues found many previously undiscovered stars in IC 10, and while they don't yet know if any of them are of the WN variety, additional observations can now tackle this question.

Now for the cautionary note. In the Wild West of Internet news, many media companies simply repost electronic press releases that they receive from sources. This latest work on IC 10 was published in the Astrophysical Journal on June 10th, but no one aside from professional astronomers noticed. So earlier this week, the Keck Observatory issued a press release to stir up broader interest. It contained the following quote from Keck director Taft Armandroff: "We can now study individual stars of galaxies several million miles from Earth." I'm certain Armandroff meant to say "light-years" rather than "miles" — and a revised version of the press release on the Keck website reflects that — but already the Web is rife with news reports that repeat the original and obviously (to anyone who thinks about it) erroneous quote.

I see this happen all the time now. I suppose it's inevitable when the news media and the public act as if it's more important to get a story first than to get it right.

The description "rife with news reports" is misleading, because Google reports only 12 articles have been posted, and all of them use the public version of the release. The version to which this article refers was only found in a private, non-public draft. Compare that to reports this week about Uranus (150+ articles), and that's something that can be considered widespread, but not this.

I agree media outlets have a responsibility for the content, but this is not a good example. The release spends an entire paragraph talking about how the new measurements enabled the precise distance to be calculated ... then presents that number clearly.

I would rather SkyTel just report on the news, and keep the media watchdog stuff for folks like Knight Science Journalism Tracker (http://ksjtracker.mit.edu/)

I have a a little game I like to play. When television news reports the distance to an astronomical object, see how many powers of ten they are off. Strangely, CNN seems worst. I recall one report where if the scale had been correct, the Earth-Saturn distance would have been about one foot.

I have a a little game I like to play. When television news reports the distance to an astronomical object, see how many powers of ten they are off. Strangely, CNN seems worst. I recall one report where if the scale had been correct, the Earth-Saturn distance would have been about one foot.