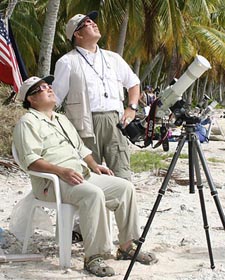 The husband-wife team of Imelda Joson and Edwin Aguirre await totality on the beach near the village of Tumukuru on remote Tatakoto Atoll in the South Pacific.

For July's total solar eclipse, our viewing site was on Tatakoto, a tiny isolated atoll in French Polynesia’s eastern Tuamotu Archipelago about 800 miles (1,200 km) east of Tahiti. We had nearly 40 eclipse chasers in our group, and we stayed three days and two nights on the atoll with local host families.

The eclipse itself was fantastic. There had been clouds throughout the morning, but about 30 seconds before second contact the rapidly dwindling crescent Sun entered a huge break in the cloud cover. We knew right away that, except for some very thin passing clouds, we would definitely see totality — and we did, for the full 4½ minutes. Everyone was ecstatic!

That afternoon, after the eclipse, we went to the island’s primary school and presented the mayor, the school’s headmaster, and the children of Tatakoto with a telescope we'd brought with us. Donated by Celestron and shipped to Tatakoto by Jen Winter's StarGarden Foundation, the AstroMaster 90AZ refractor came with an alt-azimuth mount on a steel tripod, a small finder, two eyepieces, a star diagonal, The Sky planetarium program, and manuals.

We assembled the telescope for them and showed them how to use it. The kids then eagerly waited in line to take their very first look through a telescope. It was only a distant coconut tree — but they were all very excited and happy. 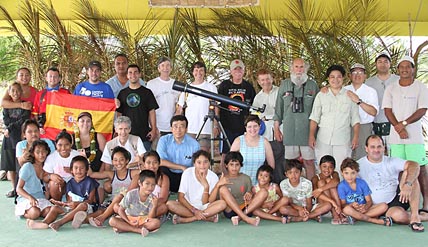 Eclipse chasers and islanders gather to celebrate the donation of a small telescope to Tatakoto's school.

The island is blessed with some of the clearest, darkest, and most pristine skies we’ve ever seen, and thanks to the generosity and support of Celestron, the children of Tatakoto now have a superb tool for exploring the beauty of the night sky. Hopefully, the telescope will help raise interest and awareness in astronomy.

After dinner that evening, our group went back to the school where the people of Tatakoto had prepared a special cultural show for us. Over the next two hours, we were treated to authentic, traditional Polynesian music, songs, and dances. These were not professional artists performing but ordinary folks who wanted to showcase their talents and their culture. It was a wonderful presentation. At the end of the show, the dancers invited several of our members to join them. Everyone had a great time! 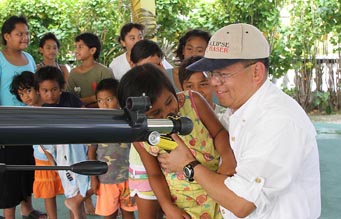 Since the sky was crystal clear on our final night on Tatakoto, we hosted a stargazing session for our members at the town’s wharf. At latitude 17° 21′ south, the island offered a spectacular view of the Milky Way. With practically no light pollution or smog, the night sky was studded with countless stars from horizon to horizon. Scorpius blazed directly overhead, and to the unaided eye, the dense star clouds of Sagittarius appeared like balls of cotton crisscrossed by dark lanes. People armed with binoculars had a fun time scanning Carina, Crux, Centaurus, and the other far-southern constellations.

By the time our star party ended after midnight, we could see the Small Magellanic Cloud rising in the southeast. We wanted to keep on taking photos of the Milky Way, but we had to pack for an early-morning flight back to Tahiti. Even so, our cameras — and our hearts — came back full of the warm, wonderful experiences we shared on that tiny island.

Globetrotters Edwin Aguirre and Imelda Joson love to fish, collect seashells, and photograph the world around them. Their website, Edwelda's Universe, offers a sampling of their travel experiences.