S&T contributing editor Govert Schilling tells the story of his recent expedition to the unique science laboratory located at the inhospitable South Pole. 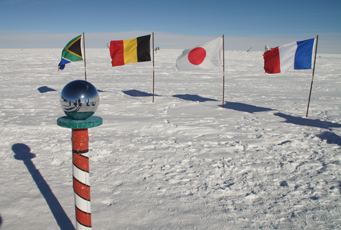 The ceremonial marker of the South Pole, placed when the Antarctic Treaty was signed by 12 nations, now lies hundreds of feet away from the true geographic South Pole.

The most remarkable thing about the South Pole is that it is, well, pretty unremarkable. If it weren’t for the buildings of the U.S. Amundsen-Scott South Pole Station, you wouldn’t know you were at the bottom of the Earth. For tens of miles north (the only possible direction from the pole!), the landscape looks more or less the same: a blindingly white frozen plain with little relief.

Finding the “true” (geographic) South Pole isn’t as easy as it might seem. Even the ceremonial marker — a barber pole with a mirrored sphere on top — now lies a few hundred feet away from 90° south. The geographical coordinates of the ceremonial site changes slowly as the Antarctic ice cap shifts some 30 feet each year, and moving the marker and the surrounding ring of flags, honoring the 12 original nations who signed the Antarctic Treaty, would be too difficult. 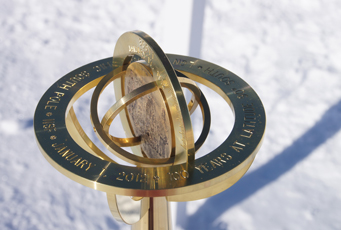 Instead, a rather inconspicuous sign, ceremonially relocated every New Year’s Day, marks the spot where Earth’s meridians cross — the point where our planet’s rotational axis passes through its surface, and where Polaris, the North Star, lies at the nadir, the invisible point directly beneath the marker.

I journeyed to both the ceremonial and “true” South Poles in December as part of the National Science Foundation’s media visit program. More than anything else, my visit was too short. Our small group spent about eight hours at the pole, enjoying introductory briefings, guided tours, and tours of science facilities. However, the extreme cold (a wind chill of almost –40° in Celsius and Fahrenheit) and the thin air (the South Pole is at an altitude of 2,830 meters, or 9,284 feet) slowed things down, and we had to skip a number of interesting destinations. 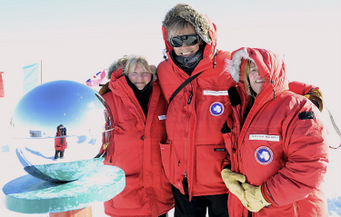 But what we did see was intriguing — especially the IceCube Neutrino Observatory, which detects high-energy neutrinos from outer space. The observatory consists of more than 5,000 detectors melted into a cubic kilometer of ice, making IceCube “the largest human construction that cannot be seen,” says principal investigator Francis Halzen (University of Wisconsin). In a future issue of Sky & Telescope magazine, I plan to describe the observatory and its scientific results in more detail.

Next door to IceCube’s data analysis center (which is aboveground) sits the 10-m South Pole Telescope, arguably one of the most photogenic structures of all the science stations. The telescope is one of the most sensitive ground-based instruments studying cosmic microwave background radiation. Its polarization measurements may provide cosmologists with confirmation of the inflationary epoch in the very first fraction of a second after the Big Bang. 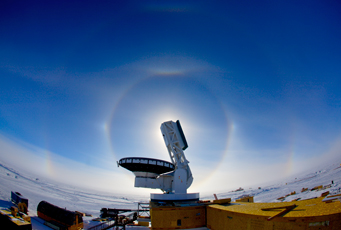 At some distance from the other buildings, meteorologists at the Atmospheric Research Observatory carry out daily measurements of carbon dioxide content, pollutants, and aerosols in the Antarctic atmosphere, which is reportedly “the cleanest air on Earth.” Elsewhere, geologists use sensitive instruments to monitor earthquakes and seismic tremors around the globe.

During the austral summer season, some 150 to 200 scientists, technicians, and support staff live and work at the South Pole Station; in the winter season, the number drops to about 25. For those who live and work here, the recreational room, movie theater, music room, sports hall, gym, and sauna are well-deserved luxuries in an inhospitable environment. 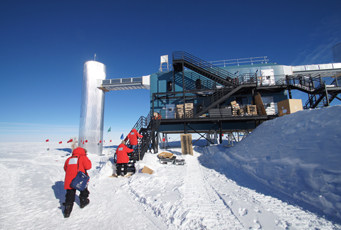 Heavily parka-ed visitors climb up for a tour of the science facilities located at the Amundsen-Scott South Pole Station.

Only 101 years ago, Roald Amundsen and Robert Scott reached the South Pole for the first time in history. Compared to their sufferings — Scott and his team perished on the way back — a present-day trip to the pole feels like a stroll through the park. Still, the scientists and support staff demonstrate commitment and perseverance by coming here. They hail from a wide variety of disciplines and locations, living and working in relative isolation, often for weeks or months on end, to add to our knowledge about the universe we live in.

Then again, I also understand that the South Pole has a lot of addictive value. “Antarctica gets into our blood,” says science support manager Paul Sullivan. “That’s why we come back all the time.”

Who knows? If a new opportunity presented itself, I wouldn’t hesitate for a second to come back. Provided I can stay much longer — any openings for a winter-over position?

Very interesting and amazing. Thanks for the article and beautiful pictures

The photo by Jeff McMahon contains more than just a sundog. There are at least 6 different types halos and arcs in this photo in addition to the 2 sundogs.