The Chambliss Award for Amateur Achievement for 2008, presented by the American Astronomical Society (AAS), was awarded to Steve Mandel of the Hidden Valley Observatory, Soquel, California, last week. Mandel was cited for his many contributions to wide-field imaging, including collaboration on the Mandel-Wilson Unexplored Nebulae Project, a survey searching for extremely low surface brightness interstellar clouds in the Milky Way. 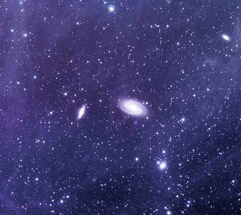 An integrated-flux nebula (IFN) permeates the region surrounding galaxies M81 and M82 in Ursa Major. Click on the image for a larger view.

First noted on glass plates recorded at Palomar Observatory and cataloged by B. T. Lynds in 1965, the full extent of these galactic cirrus clouds were never fully explored until noticed again by Mandel while recording deep, wide-field images with a 4-inch Takahashi FSQ-106 astrograph.

These structures, dubbed integrated-flux nebulae (IFNs), are illuminated by the combined visible and ultraviolet light from the entire galaxy. This distinguishes such regions from the typical reflection nebula, which is illuminated by a nearby star.

It's now also known that in addition to scattering blue light, IFNs also weakly glow in red and infrared light. The suspected culprits are dust particles, specifically their component known as polycyclic aromatic hydrocarbons (PAHs). In some cases the so-called extended red emission can account for 30% of the light being emitted from these clouds.

The AAS announced other annual award winners last week, including George W. Preston of the Carnegie Observatories, in Pasadena, California, who received the Henry Norris Russell Lectureship for 2009. Alicia M. Soderberg of the Harvard-Smithsonian Center for Astrophysics received the 2009 Annie Jump Cannon Award. And the AAS Education Prize for 2009 went to Mary K. Hemenway of the University of Texas, Austin. She was honored "for her leadership and dedication to astronomy education and improvement of K–20 science education at the state and national level throughout her career."

What an incredible achievement for Mr. Mandel. Hat's off to him!