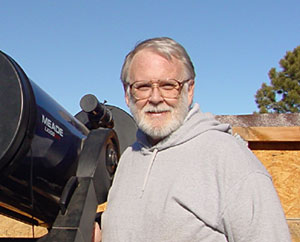 Brian D. Warner, winner of the American Astronomical Society's Chambliss Amateur Achievement Medal for 2006, stands next to one of the telescopes at Palmer Divide Observatory in his Colorado backyard.

The American Astronomical Society (AAS) has awarded the Chambliss Amateur Achievement Medal for 2006 to asteroid enthusiast Brian D. Warner, owner and director of the Palmer Divide Observatory near Monument, Colorado. This award, being given for the first time, is named for Carlson R. Chambliss (Kutztown University, Pennsylvania), who donated the funds to support several new AAS prizes. The Amateur Achievement Award consists of a 224-gram (½-lb) silver medal and a $1,000 honorarium.

The AAS, North America's principal association of professional astronomers and planetary scientists, cited Warner "for his many contributions to the photometric study of asteroids. His skillful, methodical observations using multiple CCD-equipped telescopes at Palmer Divide Observatory have resulted in the publication of more than 200 asteroid light curves. His discovery of numerous binaries in the main belt has overturned the idea that binary asteroids form only through tidal interactions with planets. Warner encourages and supports other asteroid observers, both amateur and professional, through his ongoing development of the software MPO Canopus, his regular writing in the Minor Planet Bulletin, and his book A Practical Guide to Lightcurve Photometry and Analysis, now in its second edition (Springer, 2006). His efforts have facilitated a 21st-century renaissance in precision measurements of asteroid light curves."

Warner studied physics at the University of Colorado and earned his Master of Science degree from James Cook University in Queensland, Australia. He is a full member of the AAS Division for Planetary Sciences and a trustee of the Society for Astronomical Sciences, one of the leading groups promoting professional-amateur collaborations for astronomical research.