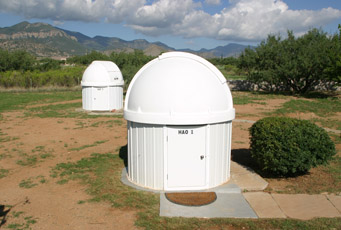 Hereford Arizona Observatory, used for observations of exoplanets (for XO and AXA projects), dwarf eclipsing binaries (for Vanderbilt University) and white dwarf monitoring for exoplanet transits. One dome houses a Celestron 11-inch (CPC-1100) telescope, and the other houses a Meade 14-inch (LX-200GPS). Both are controlled using buried cables. The domes are 8-foot-diameter ExploraDomes, and are motorized for azimuth movement only.

To get involved, you'll need a setup capable of doing fairly good photometry of a 13th- to 17th-magnitude star once or twice a minute for hours on end. That's a challenging task, but if you're a well-equipped amateur, you'll find it easier than measuring regular exoplanet transits.

White dwarfs are the small, dense cores that remain after a star has gone through its red giant phase, used up its nuclear fuel, and thrown off much of its mass. A white dwarf packs about the mass of our Sun into a sphere about the size of Earth. The PAWM observers will watch for white dwarfs periodically dimming as something eclipses them. The project will run only for the month of September, which should be enough time to find fast-orbiting planets close in. If the amateurs find signs of a transiting object, professional astronomers will consider more seriously the possibility that exoplanets might orbit white dwarfs, and begin investigating with more powerful instruments. Currently, more than 26 amateurs have signed on to the project.

White dwarfs make an attractive target for amateur transit hunters because they are so small. Even an Earth-size planet crossing in front of a white dwarf would eclipse it deeply or totally, causing its brightness to drop periodically by up to 100%. The duration and depth of the eclipses would reveal the planet's diameter. Their period would tell the planet's distance from the white dwarf and hence its temperature, more or less. 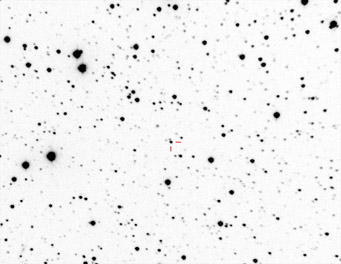 Although professional astronomers have access to better instruments, amateurs have their own advantage: they work for free. Therefore, they can monitor a star for a long time, even if the chance of discovery is very low. "Large professional observatories are very expensive to use, with per-minute costs getting into the hundreds of dollars. Therefore they aren't used for things that require hours of monitoring with small payoffs or low probability of payoff," says Gary.

At the same time, the chances of observing a planet transiting in front of a white dwarf are low. Such worlds are thought to exist: dusty wreckage from their collisions has probably been identified around newly formed white dwarfs already. But for a transit to happen across such a tiny star, an object would have to orbit very close to edge-on, as seen from our viewpoint. Even a planet close enough to a white dwarf to be in the star's current habitable zone would have only about a 1% chance of causing transits, estimates Eric Agol (University of Washington), an astronomer whose recent research paper inspired Bruce Gary. Also, such a transit across a white dwarf would last only a couple of minutes.

Astronomers aren't sure whether planets can exist that near a white dwarf at all. When a star swells up to become a red giant, it swallows anything that orbits out to roughly Earth's distance from the Sun. If a planets does exist closer in, it must have either migrated there at a later time or perhaps congealed out of material thrown off as the red giant came apart.

A sign of hope for such a weird planet-forming process, though, is the existence of two pulsars (quickly rotating neutron stars) known to be perturbed slightly by planets wheeling around them.

Because a white dwarf puts out little light and heat, its current habitable zone (where liquid water could exist) is quite small and close in. An eclipse by a planet there would repeat approximately every 12 hours. Such a world might have plenty of time for life to evolve: white dwarfs cool slowly, over billions of years.

Even if the PAWM project fails to turn up anything, a negative result will useful. "If no transits are detected an important constraint will be made on the likely success of a professional search," says Gary.

"This is a really exciting time to be an amateur astronomer," adds Agol. "Technology has leveled the playing field."

I had the opportunity to talk with Freeman Dyson about this. See it at http://www.youtube.com/watch?v=hWObkB-bCgI He also mentioned that we may be able to detect moons this way, also.