It's a calm summer evening here in Boston, but high above me in space an unseen battle rages.

Thousands of miles up, an invisible wind of electrified gas and magnetic fields from the Sun constantly slams into and around Earth's magnetosphere, the protective bubble created by our planet's magnetic field. Meanwhile, inside the bubble, a barrage of charged particles zip up and down along field lines, creating powerful electric currents and a dangerous radiation environment. And that's on a quiet night.

But when the solar wind gets whipped up, Earth's defenses start to break down. Waves of solar-wind plasma leak into our electromagnetic cocoon. Choked with extra mass and field lines, the night-side magnetosphere sometimes explodes with a violent release of pent-up energy — termed a substorm — that causes a sudden brightening and poleward spreading of auroras in the upper atmosphere.

Space physicists have debated the cause of substorms for decades. Some thought the trigger involved a disruption of powerful electric currents (think "humongous short circuit") about 40,000 miles down the magnetosphere's tail. Others believed the source region to be two or three times farther out, where magnetic field lines become pinched together, reconnect, and snap inward — like suddenly letting go of stretched rubber bands. 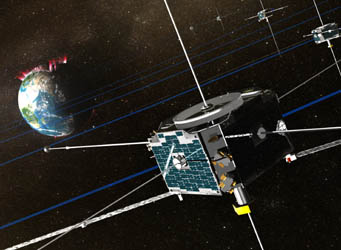 A depiction of some of the five THEMIS spacecraft in orbit. Launched as a group on Feburary 17, 2007, they've undertaken a two-year mission to study how auroras and other processes originate in Earth's magnetosphere.

To pin down which is the cause and which the effect, last year NASA launched a quintet of identical satellites collectively called the "Time History of Events and Macroscale Interactions during Substorms" mission, or THEMIS. (Here's another case of the space agency getting its mission monikers from the General Office Of Far-fetched Identities, or GOOFI — but I digress.)

The THEMIS craft are spaced out such that all five periodically form a long line down the magnetosphere's tail. And they had just such an arrangement when a substorm broke out last February 26th. By timing when the resulting electromagnetic wave swept over each craft, and folding in auroral observations made by a host of ground stations, scientists have concluded that magnetic reconnection really is the triggering event. Case (finally) closed.

"What was then surprising to us was that the aurora brightened almost
immediately after reconnection, but before current disruption," comments THEMIS principal investigator Vassilis Angelopoulos (University of California, Los Angeles). "This suggests the aurora is linked much more closely and directly to the reconnection process than we previously thought."

Normally, trying to understand magnetospheric physics makes your head hurt. But at a press conference last Thursday, Angelopoulos and others did a nice job of summarizing what's been found. The announcement was timed to coincide with the online publication of his team's results by Science.

You'll find a downloadable transcript of the press conference here, and there's a slew of supporting graphics and animations (techy but colorful) here.

I suspect GOOFI also advises the IAU on planetary classification.