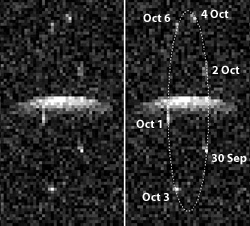 A composite radar image of the Earth-crossing asteroid 2000 DP107 reveals 800-meter-wide primary and the location of its a smaller satellite over a week-long period in 2000. Because this is actually a map of Doppler shift versus range, the objects and the orbit appear distorted.

Sometimes a just little data can have powerful implications. That's what happened when a team of radar astronomers used the Arecibo radio telescope to observe a little asteroid dubbed 2000 DP

Surprisingly, the near-Earth space rock turned out to be "rocks," a pair of bodies 2.6 kilometers apart that whirl around a common center every 42 hours. From the radar echoes, Jean-Luc Margot (Caltech) also deduced that the two objects are 800 and 300 meters across, that they have an average density of 1.7 grams per cubic centimeter, and that up to half of their interiors may be empty space. DP

These days, finding a double asteroid is hardly a surprise — especially among the bodies in our planet's vicinity. As Margot and seven colleagues noted last week in Science Express, the online version of Science, "[Near-Earth asteroid] binaries appear to be common," representing about a sixth of the whole population. This fraction agrees not only with theoretical estimates, it matches the "ground truth" observation that about one of every seven craters on Earth is a side-by-side pairing.

The two components of asteroid 2000 DP107 orbit each other 2.6 kilometers apart, a little more than the total span of San Francisco's Golden Gate Bridge.

Knowing that scores or even hundreds of near-Earth asteroids have split personalities would be a sobering complication for any plan to protect our planet from future impacts. "Of course, the most important thing to know about any [threatening asteroid] is whether it is two objects or one," comments coauthor Steven J. Ostro (Jet Propulsion Laboratory), "and this is why we want to observe these binaries with radar whenever possible."