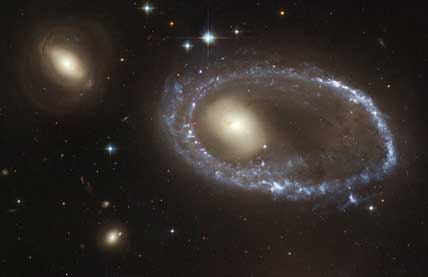 The Hubble Space Telescope's Advanced Camera for Surveys took this image of ring galaxy AM 0644–741 in January 2004. Four filtered exposures were combined to create this natural-color view.

To mark the 14th anniversary of the launch of the Hubble Space Telescope, the Hubble Heritage Team has presented the world with a ring — a ring galaxy. The unusual appearance of the star system designated AM 0644–741 is the result of a galaxy collision. Millions of years ago another galaxy (outside the field of view above) plunged directly through the center of the disk of what was once a spiral galaxy. The intruder left behind an expanding blue ring of intense star formation in its gravitational wake.

AM 0644–741 lies about 300 million light-years away in the constellation Dorado; the ring is about 150,000 light-years across. Visit HubbleSite.org for an animation that presents a wide-field view of the region and then zooms in for a close look along the ring.

Hubble was launched aboard the Space Shuttle Discovery on April 24, 1990. Although the future of the orbiting observatory remains uncertain, a committee has been established to study the options to keep the telescope operational.